‘What will I wear to your funeral?’ celebrates the good in goodbye

‘What will I wear to your funeral?’ celebrates the good in goodbye

There is a story behind the colourful titles that Kellie Curtain has given each chapter of her book, ‘What will I wear to your funeral?’. Each is named after a shade of her mother Pamela’s lipstick – ‘She wore Fuchsia Shock, ‘She wore Passionata Pink’, ‘She wore Raisin Pearl’, and the up-beat list goes on.

Kellie explains Pam was partial to any lipstick with a shimmer effect. She loved bold colours and matching them to her outfits, mixing them when off-the-shelf colours weren’t quite right. She never left home without her lippy, which she could expertly apply even while driving, keeping her eyes glued on the road. Bright lipstick enabled Pam to put her best face forward and get on with things, like an armour, Kellie says. She continued swiping and gliding bright colours with precision across her lips while she was living with, and dying from, her second case of breast cancer.

Kellie, a former TV journalist, says she didn’t want to write a book about cancer and it’s also not a book about grief. Instead, she gives a very down-to-earth, intimate account of what happened in the final weeks of her mother’s life. It was a time of ordinary conversations, had over cups of tea and glasses of red wine, but Kellie realised with hindsight that they were precious and a source of great comfort. Because nothing was left unsaid, it made it easier for Kellie and her three brothers to accept their mother’s death and let her go, despite having started out wanted everything possible to keep her alive and with them.

“There is always hope for a miracle, but you need to plan for the inevitable. We are all going to die. No-one is getting out of here alive,” says Kellie, whose father had died 20 years prior.

“The death itself, and coming to terms with death, is made a lot easier when you talk about it. Having those conversations takes so much of the fear out of death. It was only with hindsight that I realised that she prepared us all and that eased the path when she’d gone too.”

Once Kellie had accepted that Pam only had weeks to live, her instinct was to start writing down the many questions that came to her mind. Mother and daughter had long been close, but Kellie realised she was “losing her reference library”. It was her last chance to find out what she didn’t know.

Kellie’s lists covered practical issues, like allergies and how to look after her mother’s orchid, sentimental details like where a particular piece of jewellery was from, and personal preferences Pam had for her funeral.

Pam, who was always immaculately dressed, surprised Kellie with some of her no-nonsense responses. She wanted to be buried in her white nightie – why waste a garment that Kellie might enjoy wearing later when it would just go up in smoke? – and without her “fantastic” wig, which she thought someone else with cancer could use. She was appalled by the suggestion that ‘Wind Beneath My Wings’ be played at her funeral and wanted the cheapest casket available, which her adult children and grandchildren decorated with their handprints in her honour.

It’s a moving book with a predictably sad ending, but it’s not short on laughs, and Kellie says many readers have asked whether it’s wrong to say they’ve enjoyed it.

Kellie and her brothers fight happily throughout the book and back one another through hilarious dark moments. A priest they’re not very enthused about reads their mother her last rights, referring to her as Pat. The unintended slight inspires Kellie’s brother Steve to thank the priest for his efforts, pointedly referring to him by the wrong name.

“I said to Steve, ‘I’m really glad that Pat has gone to heaven but where does that leave mum?’,” Kellie tells Palliative Matters. “Pat has been sent off to eternal life and Pam is still here in bed.”

Kellie says support from a palliative care service gave the four siblings the confidence to care for their mother at home, enabling them to be with her as her breathing changed and then as she took her last breath.

During a recent radio interview Kellie said that while being diagnosed with a terminal illness is shocking, in some ways, it can be a gift, because “in reality none of us know when it is all going to end”. Having lived through her father’s unexpected death, she says an illness can be “a real warning bell, to say the things you’ve always wanted to say, and if you’ve said them before, say them again.

“I don’t think there is anyone who has tired of someone saying they love them.”

Kellie says she and her brothers felt victorious in the moment that their mother passed away, as they understood that she had no quality of life left, and knew she had died surrounded by people she loved.

“Through this book I just hope it might start some conversations [that people] are fearful to have,” says Kellie.

“No-one likes to lose someone they love dearly, but I think not having those conversations is far worse. Regret is a much heavier burden to carry than fear.” 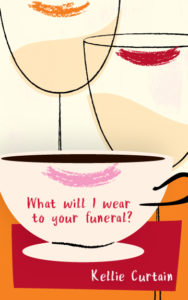 Kellie has compiled excerpts from ‘What will I wear to your funeral’ for Palliative Matters readers – read them here.

‘What will I wear to your funeral?’ is available in paperback and as an ebook from Goodreads and  Amazon.