Briony Lyle will share insights from her extraordinary life with late husband, professional golfer Jarrod Lyle, at the Oceanic Palliative Care Conference this September. From their high school days in Shepparton, Victoria to the world sporting stage – Briony was by Jarrod’s side throughout the highs and lows of his professional sporting career, multiple cancer diagnosis and palliative care. In a special Q&A plenary session ‘Caring for Jarrod – A shared palliative care experience’ Briony will be joined on stage by Jarrod’s Aunt and palliative care nurse, Kerrie Fitzpatrick - who played a vital role in caring for her nephew at the end of his life.

Briony spoke to Palliative Matters recently about life since Jarrod’s death last August and her passion for her cancer charity work as part of Challenge’s #DoingItForJarrod campaign.

There’s a natural honesty, humour and sense of generosity that seeps out of Briony Lyle from the very first conversation.

She answers questions directly and spontaneously, recounting poignant stories from her husband Jarrod’s final days with a sprinkling of warmth and bittersweet laughter that puts you instantly at ease.

Less than 12 month since Jarrod’s death in August 2018, Briony says she and her two daughters (7-year-old Lusi and 3-year-old Jemma) are coping “better than OK”.

“We are doing OK – probably better than OK. They are both incredibly resilient – both quite different in terms of their age and understanding. We talk about Jarrod every day. My 3 year-old knows Jarrod has gone and most days she seems to understand, but then out of the blue she’ll come up with things like ‘When Daddy’s finished “dieding” can we go see him?’ It’s hard – I try to keep my responses honest and consistent – little kids sometimes have no concept of forever.” 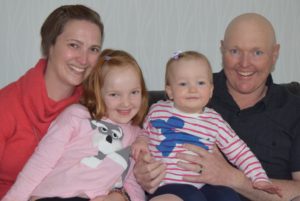 Jarrod was first diagnosed with Acute Myeloid Leukaemia at the age of 17. After months of treatment at the Royal Children’s Hospital in Melbourne followed by a lengthy period of recovery, he turned professional in 2004. But in between the highs of his golfing success, subsequent cancer diagnosis and treatments followed in 2012 and 2017, and he commenced palliative care in July 2018. Jarrod died on the 8th August 2018 in Torquay, less than two weeks before his 37th birthday, surrounded by Briony, his Aunty Kerrie, Uncle Lance and close family friends.

Since then Briony has actively continued Jarrod’s charity work for Challenge – launching the #DoingItforJarrod campaign to raise money for families of children receiving cancer treatment. She is also working with a writer to finalise Jarrod’s memoirs – which will be published in August 2019.

“There’s definitely mixed emotions in doing so much work so soon, but I just find it really, really fulfilling and it helps me face the hard days,” explained Briony.

“It’s a really different role for me. When Jarrod was alive he was an ambassador for Challenge. I was just tagging along – meeting people and working in the background, but he was the one giving his time and lending his public profile to different things.

“But now, for me to be in the office and on the ground driving things, it’s very satisfying. It definitely makes me feel connected to Jarrod in quite a different way – I say his name a hundred times a day – mainly because that’s the name of the campaign – and it’s nice…

“I guess there’s a grieving process and it’s different for everyone – but I feel I’ve got this opportunity to grieve in a really positive way and it’s working for me. I’m loving it. I’ve jumped in feet first and this entire fundraising campaign has just gone gangbusters.

“Jarrod and I often talked about the fact that what we experienced was very public – and I guess that we made that decision at the time because we didn’t think it was going to end the way it did – but then we were the recipients of so much amazing support from the golf community and the general public, and we were inundated with messages. So many people just don’t get that… and that’s what kept us going. Through my work with Challenge I’m just trying to let other families see that I know what they are going through, they aren’t forgotten, and they don’t have to do it on their own.”

Briony’s also keen to do work in the future to support carers. “I was so lucky to have Kerrie – she and I were really like partners in Jarrod’s palliative care in the end and I knew I could leave the room and she’d take over. A lot of people don’t have that.”

But when it came to accepting help from others, Briony found it a bit harder.

“People do want to help – but they often don’t know how – or don’t know how to ask. You are trying to be strong and keep everything together for everyone. That’s when all the little things make a difference. It took me a long time to be able to speak up when people offered help and say ‘what I’d really appreciate would be someone to come and mow my lawns.’  I found most people were relieved to have a job to do… to know how to help. I’m really interested in exploring the ways we can support other families to get the help they need through tough times.”

Briony says that one thing that’s become really become apparent to her is the value of having tough conversions openly and honestly before it’s too late.

“Conversations are powerful. Since Jarrod’s death and our experience with palliative care, I’ve become so passionate about the need to talk about death.  We are just such a death denying society…”

She says she’s grateful for the time she had with Jarrod, which allowed them to talk and face everything together as a team… just as they had throughout life.

“I knew with 100% certainty what Jarrod wanted – not just final wishes – but so much more than that. Not only did I know it, but people around me did too because they were part of the conversations some of the time as well.

“Jarrod and I weren’t going to deny what was happening, and even if he was going to pull through at the last minute it still didn’t hurt to say what we wanted to say or talk about all those really tough things. That’s the one thing that made the grieving process and the direct aftermath so much easier because I knew what to do. Like it was already written down – and some of it literally was.”

Briony recounts with a wry laugh the “ridiculous scenario” when she had to leave Jarrod for an appointment once he had returned home for palliative care.

“I was going to the funeral director – and he knew I was going and he knew one of the things that I had to do was select a coffin. So we talked about it… I said, ‘well which one do you want?’ Then the one he selected wasn’t going to come through in time. So I went back to him and said ‘Ok, so what’s your plan B’!

“There wasn’t anything we couldn’t talk about. I actually look back at some of those conversations so fondly now. He even helped plan some of the funeral details – so much so that on the day some of the wording had actually come from his own mouth, like when he told us to say that no one should wear a tie, because he’d kick you out if you did.

“For me there was no uncertainty, no questions – like ‘are we doing the right thing’ – we just went about it and it was almost easy, despite the magnitude of what had happened.”

In preparation for writing his soon-to-be published memoirs, Jarrod also made a number of voice recordings to capture his stories and thoughts.

“We both thought he’d recover and get the chance to finish the book himself.  There are some tapes from those last days when he knew he wasn’t going to see the book to completion that I still haven’t listen to. I can’t – I’m not ready. Maybe one day...”

Briony candidly admits not knowing what the first anniversary of Jarrod’s death will feel like. “There’s an incredible number of days throughout the year – I recently came up with a list of 13 or 14 days – that give me pause to stop and think about the enormity of it all.  There’s the obvious ones like birthdays, father’s day, wedding anniversary – but then there’s various diagnosis dates, his transplant dates, when he went into hospital…  lots of significant days to stop and remember. I think it’s a good thing to remember it all, but sometimes it seems like too much.”

Watch the video below for full details of the #DoingItForJarrod fundraising event throughout August and September. 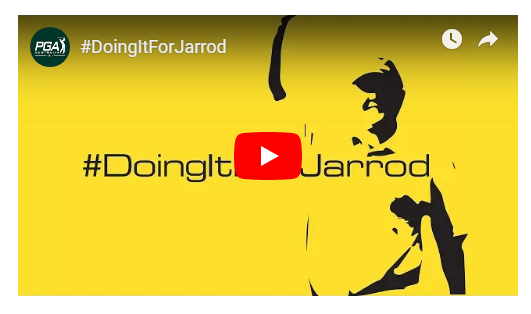