The first thing that strikes you when you meet Nils Lantzke is his generosity of spirit. When he tells the story of how he got his first alpaca, Honeycomb, as a gift in 2003, Nils immediately recalls how he felt he had to share him with as many people as possible.

One day, as he was walking Honeycomb around Giralang, a lady came out of her house and told Nils that her father had not spoken for a long time, and that maybe the alpaca could help.

“I lifted the elderly man’s hand and put it on Honeycomb’s little woolly head, and then the old man said ‘Hon…ey…comb’. He started talking after that,” recalls Nils. The moment had been magical, and an idea germinated in Nils’ head that, maybe, Honeycomb could help even more people.

Since that day Nils has made hundreds of community visits as part of his voluntary Alpaca Therapy initiative, giving freely of his time to visit hospitals, nursing homes, hospices and primary schools.

In 2020, Nils’ dedication and generosity was acknowledged when he was nominated as ACT Senior Australian of the Year.

Nils was not new to volunteering when he first came up with the idea of starting Alpaca Therapy, having helped as a volunteer massage therapist at a Canberra hospice in the 1990s. For his alpacas, however, it was a completely new role. But it didn’t take long to see that they were just perfect for the job!

First with Honeycomb, then with Andronicus, llama Forrest Gump, Hercules, Mimosa, and now with Paprika, Giraffe and Willow, Nils visits people who need a bit of sunshine in their life.

“Everywhere I take the baby alpacas, people smile,” says Nils, also noting that “there are not that many smiles around anymore”. He thought that the hospice would be a great place to create more smiles.

Nils says that alpacas are quiet, gentle animals that interact well with humans.

“An alpaca has eyes like deep pools of water. When it looks at you, it’s like if the rest of the world ceases to exist. The person gets undivided attention from the alpaca.”

This has a beneficial effect on people in hospices, or mental health facilities, who often need this additional attention. An alpaca looks like it just listens to you, without judgement or expectations. As Nils explains, “some people just want their stories to be heard”. 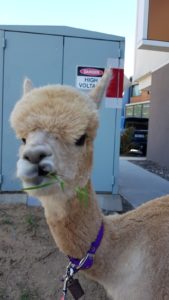 He remembers the time when Paprika, his 14-month-old baby alpaca, met a young lady who was very sad and distressed. She was crying, so Paprika slowly leaned in and gave her a kiss. Another time, Hercules met a lady with motor neuron disease who was upset because she couldn’t cry. He leaned in, tucking his face near the lady’s heart, and she began crying again.

In some cases, this special relationship continues after the person dies. Nils and his alpacas have been invited to funerals, where they get to farewell their ‘patients’ and offer some comfort to grieving loved ones. Nils’ wife sews little felted comfort hearts, filled with lavender and love, which the families also keep after their loved one died. He remembers how, during a hospice visit with his alpaca Hercules, he gave a little heart to a young man who was dying of cancer after a difficult life, then gave one to his crying mum. Later, when he attended the man’s funeral, the mother had placed her little heart in his hand, and kept his little heart as it was the last thing he touched.

“That, to me, illustrates the power of the hearts”, says Nils slowly, clearly remembering the emotions he felt at that moment.

After meeting so many people at the end of their life or in great distress, it would have been easy to imagine that Nils either had to lock his emotions up or that it would start to take a toll on him.

When asked how he manages his own emotions while volunteering, Nils takes a second to think, then says: “there’s a line in the bible that says ‘weep with those who weep’.”

“When someone loses a relative, I can feel their pain and may shed a couple of tears myself. Why shouldn’t I feel, and let them know that I feel, their pain? I think that if I didn’t feel it, then maybe I wouldn’t be able to do this sort of work.

When thinking about how his life has changed since he established Alpaca Therapy, Nils says he has “gained a much greater understanding of humanity, and feels way more compassionate”.

“My work is definitely a two-way street, which has given me the opportunity to meet hundreds of people, from politicians to health workers, and from patients to any friendly person on the street.”

“I love going to the hospice, and I can tell you it is really hard sometimes, but I wouldn’t swap it for anything.”