My parents were born in Naples, in the south of Italy. After my mum passed away in 2013 in Italy, my dad lived in Sydney with my brother Joe. A couple of years ago, at 87 years of age, dad started complaining of some pain he was experiencing and was feeling exhausted all the time. We took him to visit his GP and the local hospital. After a number of examinations, tests, and consults with medical specialists, I was informed by three cancer doctors that dad had a mass growing at the back of his head and that if they didn’t use radiation treatment to attack the mass, dad would lose his eyesight.

During that visit, the doctors kept stressing that they wanted dad to receive immediate radiation therapy. I was puzzled. Throughout the various consults, no one had informed us, least of all dad, that he might have cancer. I then confronted the three cancer specialists, saying: “Wait a minute. My father doesn’t even know that he has cancer, and you want to give him radiation therapy? Does my dad have cancer?”

The three doctors stopped in their tracks and looked at me. The female doctor responded, saying: “Yes, your father has late stage, terminal lung cancer. The cancer is throughout his body. This radiation is just to stop the mass from growing in his brain, which may cause him to lose his sight.”

I told the doctors that I would help them get my father into the radiation treatment room but first I had to interpret to my dad that he had cancer and that he was dying. I asked the doctor how long he had to live. She replied that they could not say with certainty but perhaps six months. Dad died less than three months later.

So, I turned to dad and said in Italian, some of the most difficult words I have ever spoken: “Dad, you have cancer. The cancer is terminal throughout your body.” I will never forget the look of shock on dad’s face, and how his face turned white. 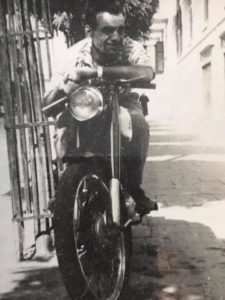 Two minutes later my brother and sister rushed into the room, after having parked the car. I had to relay the same message to them. Their response was similar. I gave dad a big hug and told him that we would be okay, and that we would work through this tough situation together.

I then turned to the doctors, who were watching silently nearby, and said: “We are going to be okay. dad now understands he has cancer. Please tell me what information he needs to know, and I will interpret it for you.” Dad was then helped into the treatment room where he received the radiation therapy. It was successful and stopped dad losing his sight. Those cancer doctors were brilliant, and I am so grateful that dad left this world with his sight intact.

I returned to Canberra where I lived and would frequently visit dad in Sydney, taking him to hospital with my siblings. One day I came to the house and dad was lying on the couch. He looked very weak, but from his greeting I could tell he was very glad to see me. I asked dad if he wanted to come to Canberra for a visit. He said he would. So, I put him in the back seat of my car and drove the three and a half hours back home, with dad and Joe in the car. I was adamant that I would get dad to a safe place, where he could be looked after.

Once we got to Canberra, we helped dad into the house. My husband, Duncan, took one look at dad and realised how much he had deteriorated. Duncan’s next words are ones that I will never forget. “Darling, your father won’t be able to make the trip back to Sydney. Please tell him that he is welcome to live at our house for the rest of his life.” At those words, I burst into tears. My husband is English and understood enough about our Italian culture to understand how important this was for our family. I told dad what my husband had said. He replied that he would like to stay with his family. I gave dad the meals that he liked to eat. I cooked him pastina, which is a chicken broth pasta soup that Italians eat when they are unwell. I served him his favourite Neapolitan coffee. We made him as comfortable as we possibly could. But we soon realised that we couldn’t do it alone, that caring for a person in the last stages of their life could be challenging.

My next point of call was to contact Clare Holland House. A short time later, a palliative care nurse named Clare, came to visit. I told Clare:

“We are an Italian family. Within our culture we would like my father to stay in this house for the rest of his life, and pass away here. We do not want dad to go to a hospice and ask that your team respect this request.”

Clare was warm and understanding. She told us that the team would respect and support our wishes, and that it could be a positive experience for people to pass away at home, if that was their desire.

Clare sprang into action. Carers ACT were contacted, and they delivered a brand-new hospital style bed for dad. Carers ACT also offered to send carers to come and help care for dad’s daily needs. Clare provided nutritional drinks that dad could sip at when he was no longer able to eat proper meals. She introduced me to her team of nurses, who would come regularly, giving dad pain relief and other medications, to make him as comfortable as possible. The nurses would come at different hours of the day and fit into our house, as if they were part of the family. I remember working on my laptop at the family dining table, while one of the nurses would be preparing Dad’s medications next to me. It all felt so comfortable and caring.

The time came when the visiting doctor said that dad wouldn’t make it through the weekend. On dad’s last day living, he began to flail and become quite agitated. The palliative care team came and administered medications to help calm him and ease his pain. Dad passed away at 3am in the morning, with my sister Anna beside him, in our house in Canberra.

When the funeral parlour staff came to take dad’s body away, we went outside to see Dad off. I remember it was a crystal-clear day, and as he was being taken away, suddenly, there was a big gust of wind. It was as if dad was sending a goodbye kiss to his family. 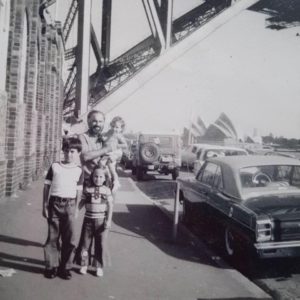 I wondered if using dad’s room again after he passed away would feel strange or somehow haunted, but this was never the case. Instead, it was like a feeling of positivity came over our house and our family. Having dad at home with his family, in a culturally appropriate space, was the best gift we could have given him. And I feel honoured that we were able to do this for him. For one year after dad’s passing, I wore black clothes. In traditional Italian culture, the women wear black clothes for a year after their parents or spouse passes away. I had done the same thing when mum passed away. This tradition is called luto.

Dad had given me permission to have his body cremated after the funeral (for Catholics, a body can only be cremated after the funeral has taken place). After much negotiation with the Italian embassy, I managed to obtain the documentation and authority to transport dad’s ashes back to Italy. I had them placed in my mother’s tomb, in the town where she was born, in Formicola. Before the pandemic I used to travel regularly to Italy and visit the cemetery where their remains lie. It is important in the Italian culture for the women to clean the gravesites of their parents. It makes me happy to know that my parents are buried in the same place, in Italy.

How we die can be just as important as how we live. We all want a peaceful passing, in a culturally appropriate way, surrounded by the people we love. What this will look like will depend on the person’s wishes.

But passing away at home does not have to be a traumatic, or scary experience. The palliative care team from Clare Holland House as well as Carers ACT made all the difference to ensuring that dad was completely supported in his last days on earth.