Grief is a feeling you don’t get over or recover from. You learn to live with it and adjust to a new reality. For this inspiring mum, the grief of losing her daughter fuelled her desire to help other families in the toughest situations of their life.

Suzanne Tunks was 18 weeks pregnant when she received the heartbreaking news that her child had a very rare and complex heart condition. Doctors didn’t know if her baby would live for days, weeks or months once born. On the 10th December 2009, beautiful little Stella entered the world with a fight on her hands. Two weeks later, on Christmas Eve, Stella had her first heart surgery with the hope for survival and for her heart to grow big and strong.

Stella was in and out of Canberra and Sydney hospitals as doctors were trying to give her the best care and opportunity for her heart to stay strong.  It was when Stella was 4.5 months old that the doctors declared there was no more treatment options and sent the family home to Canberra with a referral to palliative care.

“Still to this day I never really had an answer as to why they decided from that specific time that she was now palliative. They just cut her off and sent us back to Canberra. There was a lot of grief around that.

“I was fighting off palliative care and I didn’t want to hear that word or read anything.

“When the Palliative Care ACT team called, I agreed to proceed with palliative care and thank god we did because we had an awesome doctor and team who would come and help Stella at the drop of a hat,” Suzanne said.

Suzanne and Matthew then kept Stella out of hospital for 50 days. With exceptional care and a great medical team, Stella lived for another 4.5 months before she died on Father’s day in 2010.  After Stella’s death, Suzanne knew she wanted to help other families during the toughest times of their lives. 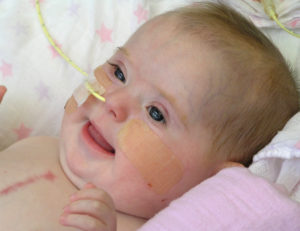 “Stella was given heart beads in Sydney which were little beads given as rewards to children for their medical procedures. I remember sitting in the ward in Canberra thinking if Stella ever gets better or she passes away, it would be nice to help other families and bring the beads program here to Canberra. So that is exactly what I did,” Suzanne said.

Suzanne registered the Stella Bella Little Stars Foundation on 1 July 2012. The bead program began to be very successful in Canberra and with the help of the St George Foundation, the bead program is now spreading to hospitals right across Australia. One of the Stella Bella Little Stars Foundation’s other key priorities is to provide financial support to families with children who have a serious illness.

“One of the beautiful things I got out of having Stella, is that I really understand what these families are going through. I have been there, I have empathy and I genuinely know what matters.

“I know how essential the necessities are so the Stella Bella Little Stars Foundation helps out by giving other families money for petrol, groceries, general expenses and most importantly support, love and understanding,” Suzanne said. 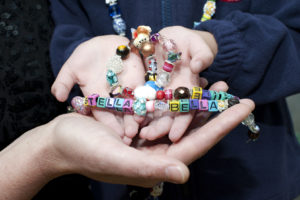 In 2017, the Stella Bella Little Stars Foundation opened up the Stella Bella Children’s Centre.  This centre is the first of its kind in Australia and offers much needed respite day care for seriously ill babies and children.

“There was no respite for kids with serious illnesses in Canberra. We got the opportunity to open the centre which includes two special care rooms and two mainstream care rooms and it has been great.

“In the future I would like provide families with the opportunity to stay open later in the evenings and eventually offer overnight respite care,” Suzanne said.

In 2018, Suzanne received the Local Hero Award for the ACT which acknowledges contributions for her selfless work with helping others in the community. Suzanne said the award was an honour and a shock to receive but was also a time of reflection.

“I had to reflect from a different perspective as to what I do and why I do it.

So when Suzanne was asked why she does what she does, her answer was simple.

“Honestly the littlest things make the biggest differences to so many people in this situation,” Suzanne said.

And her advice for families in the toughest situations of their life.

“Do whatever comes to you that makes you feel okay and it doesn’t matter how weird it may seem.”

“If you have an inside yearning, you need to honour it because it makes it so much easier to express your grief in whatever way that is.”

If you would like more information or resources on paediatric palliative care, visit the PCA Paediatric website.