Memories are timeless treasures of the heart

I witnessed an inspiring and heartfelt moment as day resident, Larry Andrews, walked into the community hall at Villaggio Sant’ Antonio aged care facility and was hailed by friends, family, former work colleagues and other fellow residents. There was a standing ovation as Larry entered and made his way to the front of the room in awe of all the people that had come to see him.

Larry Andrews, born Lawrence, was born in England and moved to Australia in 1961 after his father had come back from World War 2. Larry joined the Australian Federal Police (AFP) in 1971 working General Duties, Traffic Operations, Accident Squad and the Special Operations team where he did five years’ service as a sniper. Larry was then transferred to VIP protection and further promoted to the Prime Minsters Protection team. He was promoted once again to Sergeant and was the Prime Minister’s bodyguard for seven years.

Over the years, Larry has been an escort to former Prime Minister’s Bob Hawke and Malcolm Fraser the Prince of Wales Prince Charles and Lady Dianna. Larry travelled to Cyprus as a UN peacekeeper and in 2002 was the superintendent in charge of Police operations. Larry also was in charge of Police on Norfolk Island for three years before he returned to Australia in 2007 and retired at the age of 59. Larry, and his wife Liz, retired to Canberra, ACT.

For the past two years, Larry has been living with dementia. Since his diagnosis, Larry’s relationships with his friends and work colleagues from the AFP have changed which has caused him to feel alone and isolated.

Since Larry’s engagement with Villaggio Sant’ Antonio, Larry met Betty Szuromi who is the Activities Coordinator at the facility. Betty is passionate about exploring resident’s life stories to help them remember who they are and what they have achieved in their life. To see this passion move to a reality, Betty created the program ‘Timeless Memories’ to showcase  residents lives by bringing together their friends and family for a high tea with the opportunity to share treasured memories. 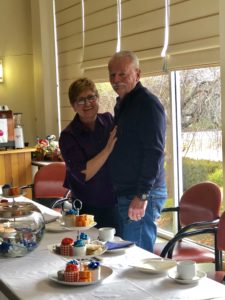 Betty created a Timeless Memory event dedicated to Larry that highlighted his professional career and brought him into contact with his old friends and work colleagues.

“By connecting residents to their past and having all their friends and colleagues come together, it gives the residents something to look forward to and makes them feel human again.

“In Larry’s instance, he may be living with dementia and has limited memories but I am hoping Larry’s friends will now stay connected with him for the rest his life and support him to make it easier in the hard times,” Ms Szuromi said.

Betty, with the help of some of Larry’s closest friends, organised the event in just over a month. People came through the doors of the aged care facility in  large numbers for the chance to see and share a memory with Larry. The room was mostly made up of former and current AFP members and they all stood up one by one and shared their favourite memory of Larry.

There were stories of Larry’s heroic moments, stories of what a great mentor and teacher he was and there were even some stories about Larry doing things he probably shouldn’t have. The expression on Larry’s face when hearing the memories was invaluable. He was admired by all. They admired his bravery, his professionalism and most of all, his friendship.

By connecting Larry with his memories, Larry was able to feel a sense of pride, joy and happiness for all he has accomplished throughout his life.

“Larry was very emotional on the day because he hasn’t seen many of the people for well over 10 years.

“Larry may not remember the people, but he recognises who they were and the memories do come through,” Ms Szuromi said

From my time at the event, I came to learn much about the greatly admired Larry Andrews  – he is a hard worker, a mentor, an AFP legend and a great friend to all that know him. He was also an influential leader.

I was blessed with the opportunity to meet Larry Andrews, and see in action the power of an approach that shares timeless memories.