Home » Palliative Matters » Carers » When the christening and funeral are one

When the christening and funeral are one

Given her early training in fashion and dressmaking, it makes sense that Anzara Clark didn’t turn to a canvas and paintbrushes when she became a professional artist. Rather, she has relied on clothing in order to tell powerful stories, including that of her grandson’s death.

Anzara created Christening Shroud in honour of Cody, who died in utero seven years ago. The finely embroidered traditional christening gown, with adaptations for burial, is also a tribute to the courage of her daughter who delivered Cody through a normal labour knowing he was already gone.

“This is a timely opportunity to raise awareness about an issue that is important to me,” says Anzara, from Dandenong in Victoria.

“When Cody died, we had no idea of the risk of stillbirths. It’s something you never think about. But tragically, six babies are stillborn in Australia every day. For these babies and their families the christening and the funeral are one.” 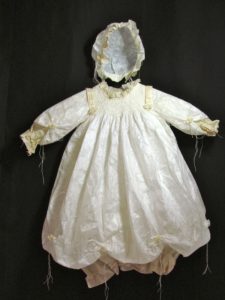 Anzara started creating the piece five years after Cody died. Crafting it took many months, as is made from delicate Japanese paper. She embroidered slowly and carefully, knowing that if it tore she would need to start again.

Anzara says it was a meditative and immersive process which left her feeling more connected to Cody. It helped her to realise that she had put some of her grieving on hold so that she could support her daughter. Making the artwork gave her new freedom to grieve.

“There were times I had to put it aside because I was quite upset and other times it was soothing,” she says.

“Had he lived I probably would have made a christening gown for him. It was a way of doing that.”

Anzara says paper is the perfect material for works concerned with death and grief because it is fragile, ephemeral and quick to break down.

“It reflects the transience of life and the fact we are here and then we’re gone,” she says.

“Also, I like paper because it is used for writing on, telling stories and passing on messages. Even though this particular piece isn’t written on, it uses a medium that is used to tell stories in a different way.”

While traditional christening gowns are symbolic of welcoming and naming a baby, the piece has been adapted to also be a garment suitable to hold and later bury a baby in.

The garment opens down the back, so that it’s easier to dress a baby. It covers the delicate skin on a baby’s hands and feet, along with any potentially distressing marks caused by birth or an autopsy.

Anzara says she had a lightbulb moment while making the garment, realising it was a profoundly healing experience with potential to help others. Now an art therapy facilitator, she runs art workshops to enable people who are grieving to engage with and explore their emotions.

“It’s not right for everybody, but the people it’s right for, it’s really right for,” says Anzara.

“Often grief is seen as quite a passive thing that happens to you, but at some stage you have to start engaging with the process and work with it rather than being swamped by it all the time.”