Volunteer who sings from the heart rewarded with valuable life lessons

Having served as a palliative care volunteer for 20 years, maybe it’s not surprising that Doreen Robinson thinks constantly – but not morbidly – of death.

“I’m one of those people who wake up every day and think about my death,” says Doreen.

“I’m alive and I’m very grateful. The possibility of death is always there, so I try to live in the present.”

The Palliative Care ACT volunteer says spending time with people who are dying at Clare Holland House or in their own homes is a constant reminder of how important it is to not worry about the future or the past.

“You have to reflect on your life of course, but doing that work I think really helps to ground me. The love that you get from people is so beautiful. I can’t describe it. They are so grateful for every little thing you do.”

Doreen makes tea, helps people with their meals, chats when they’re feeling talkative or sits in companionable silence. Behind the scenes, she contributes something more; leading the PallCare Singers who perform at two respite centres for people receiving palliative care and nursing homes. At Christmas, the choir sings at Clare Holland House, and it has performed at Palliative Care ACT social functions and events. 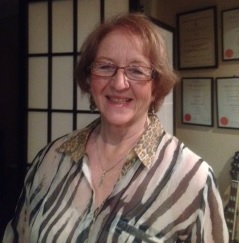 Now in its fourth year, the 19-member choir is enthused about its mission statement – “sharing joy, warmth and compassion through song” – and has a repertoire of songs with uplifting music and lyrics.

When the idea of a choir was spontaneously suggested at a volunteers’ retreat four years ago, all eyes turned expectantly to Doreen. Having achieved a standing ovation with a four-part harmony, the 15 volunteers who’d had a go at singing were inspired to do more. And they knew Doreen had studied music, played the guitar, and worked with school choirs.

Palliative Care ACT purchased a keyboard for the group and the support has been reciprocated; just recently the choir performed at the inaugural Power of Music Variety Concert to raise funding for the organisation’s volunteer program.

Doreen says when the choir started, most members couldn’t read music and had never had a music lesson in their lives. Since then, they’ve mastered two-part harmonies and are open to trying more complex musical pieces.

“I think the quality is just improving all the time,” says Doreen.

“And the people in the choir absolutely love it. Our songs have nice words and nice melodies, and performing for people who are so vulnerable means so much to them.”

Doreen says while choir numbers have fluctuated over the years, there has always been a shortage of male voices. To discuss joining, email doreen.robinson@homemail.com.au