The power of touch from life’s beginning to end

SA artist Margaret Ambridge is one of 82 artists who have entered Palliative Care Australia’s Life in Death art competition. See the full range of entries here and cast your vote for the People’s Choice award.

Early in her career, while working as a physiotherapist in aged care, Margaret Ambridge often had to explain to residents why double beds weren’t allowed. Bigger beds put staff at risk of injury, because they made it harder to lift residents and move them around.

When Margaret started work at a hospice however, she was confronted by scenarios which highlighted the emotional cost of this practical view.

She heard about people who wanted to lie next to their partner of 50 years as they were dying, rather than have a bed-rail shoved between them, and of children who wanted to climb into a bed to sleep with their dying mum or dad.

“The comment that will remain with me forever came from one of the most caring palliative care nurses I have been lucky enough to meet,” says Margaret.

“She said some people just need to climb into that bed and hold their partner after they have died.” 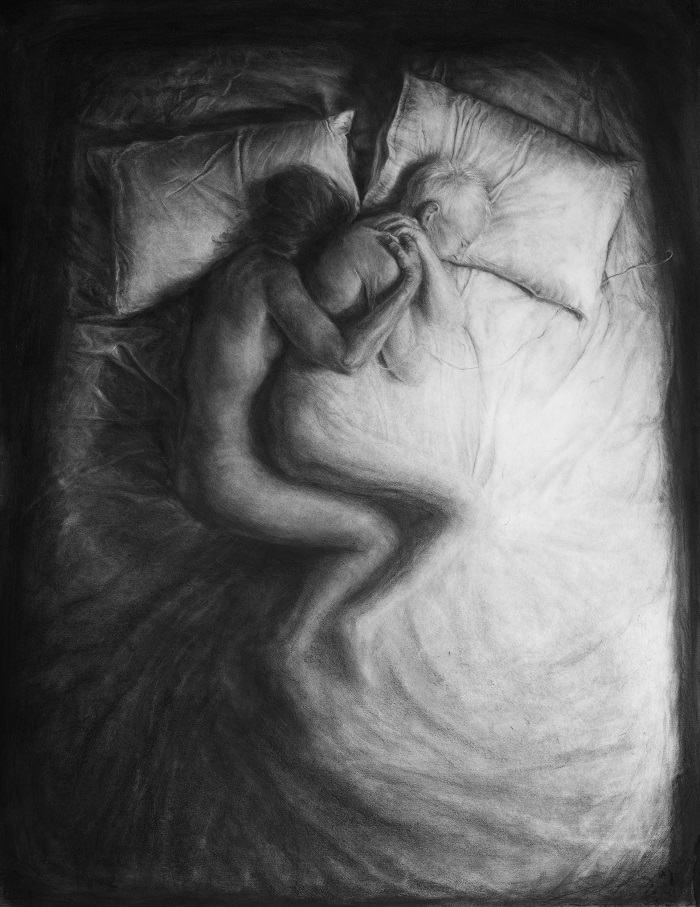 When a double bed was finally delivered to the hospice, Margaret says it enabled a whole new level of patient-centred care, which was a significant achievement.

Margaret, who is an only child, says she felt physically distanced from both her parents as they reached the end stages of life.

“My father died in a hospital storeroom because there were no beds in the respiratory ward. There was no chance to ‘hold’ my father in this environment or to even hold his hand,” she says.

She also remembers her mother’s death as a very difficult time when she felt acutely helpless. Her mother was struggling to breathe, and Margaret could do little but hold her hand.

“I don’t know if I could have helped my mother’s breathing by holding her in the bed that day, but I would have liked the choice,” says Margaret.

The power of touch – and its importance from birth through to death – is a concept that she has explored in her drawing ‘Till death’.

“The artwork attempts to depict this final ‘hold’, the tentative hold between being and nothingness, the pull of being drawn into an infinite space.

“My professional work informs my artwork. I am particularly interested in how people move through life and how they find strength in what sometimes feels like the insurmountable.”

Margaret is now a strong advocate for palliative care environments providing opportunities for patients and their loved ones to hold one another in whatever way they want or need. She says when a public health institution buys a double bed, is taking a small but important step closer to the community it serves.

“It is gratifying to see public health taking small steps forwards by listening to their staff and patients and allows them to claw back a little bit of ownership on the process of dying.”

She wanted to promote this through her art work, but says drawing the large piece affected her deeply. She spent many hours working on the piece, which depicts her hugging her partner. She drew a pump line delivering medication to him, which is also symbolic of a very thin umbilical cord keeping a frail hold on life.

“It was a confronting piece to do. It made me wonder about my own future and whether I might one day have to go through something like this.”