Talking about your life can help the process of accepting death

Dignity Therapy can bring great relief to people who are dying, but it often takes 20 hours to interview, transcribe, edit, review and present one person’s story. Russell Armstrong recognised that the therapy would be cost-prohibitive in Australia without volunteers, so he established a free award-winning service.

Having worked with oncology and palliative care patients at Barwon Health in Geelong, Victoria, Russell Armstrong had seen first-hand the positive benefits that can flow from chatting with patients about their lives as they faced death.

“When you are dealing with suffering and tragedy you’ve inevitably got some event that you have little control over,” says Russell, who has spent the past decade as a spiritual care worker.

“What you do have control over is how you tell your story and how you frame it and what you think you’ve learned from it.”

Given that understanding, he struck gold when he started studying a certificate in palliative care. While researching the topic ‘What does it mean to die with dignity in Australia in the 21st Century?’ he discovered an evidence-based psychological intervention called Dignity Therapy. It was an exact fit for what he’d understood intuitively.

Dignity Therapy relies on a trained therapist to discuss patient memories, achievements, hopes, dreams and wishes, using specific techniques and questions. The discussion is recorded, transcribed and edited, and presented with photographs in a booklet that patients usually bequeath to loved ones as a lasting legacy.

Mr Armstrong was so impressed with the evidence-based therapy that he contacted the West Australian colleagues of the renowned clinical expert who had devised it – Dr Harvey Max Chochinov – and travelled to Perth to complete training with the distinguished professor of psychiatry from the University of Manitoba.

A year later, having conducted Dignity Therapy sessions himself, relying on volunteers to transcribe them, Mr Armstrong was travelling in Canada and arranged to see Dr Chochinov again; this time to convince him the whole process could be conducted by well-trained volunteers. It typically takes about 20 hours to interview, transcribe, edit and present one person’s story. While these costs can be offset by health insurance in other countries, in Australia they are borne by the health service, making it cost prohibitive.

It was a big ask, given that the therapy’s reputation was built on empirical research done while the interviewing process was conducted by professional social workers, psychologists and nurses. But Mr Armstrong explained the strong ethos of volunteering in Australia and sold the idea that being unpaid doesn’t mean unskilled. He also promised a rigorous interviewing and training process, based on that run by Dr Chochinov. After four days of training, volunteers are mentored for several months before they start interviewing on their own, and then they attend regular group supervision.

Mr Armstrong achieved Dr Chochinov’s blessing, and Barwon Health now has a team of 10 volunteers interviewing patients and producing printed booklets which capture key aspects of their lives. Another four volunteers with secretarial backgrounds undertake the transcription of the interviews. And Dr Chochinov has become a great supporter of the volunteer model, for which he wrote a glowing letter of nomination for the Minister for Health Volunteer Awards in Victoria (earlier this year Barwon Health won the category ‘Improving the Patient Experience’).

“Qualitative evidence for the success of the program demonstrates that Dignity Therapy provided by suitably skilled volunteers can indeed be very effective – meaningful for the patient, deeply appreciated by their family, and rewarding for the volunteer,” Dr Chochinov wrote, saying that to his knowledge Barwon Health was the first organisation anywhere in the world to provide the therapy using volunteers.

“The volunteer team enhances the lives of patients by offering them a voice at a time when many patients struggle with the thoughts and feelings associated with facing the end of life. Feedback from patients and carers has confirmed that the service offered by this team of volunteers is exceptional,” says Dr Chochinov.

Countless patients and their family members have expressed gratitude for the service, provided by volunteers who’ve had careers in journalism, social work, case management, psychology, business and education.

“No drug could give [Mum] the high, the hope nor the voice that the Dignity Therapy program did,” says Sam, the daughter of a patient, Joy.

“Mum wasn’t big on expressing how she felt, and yet through Dignity Therapy Joybell found her voice.” 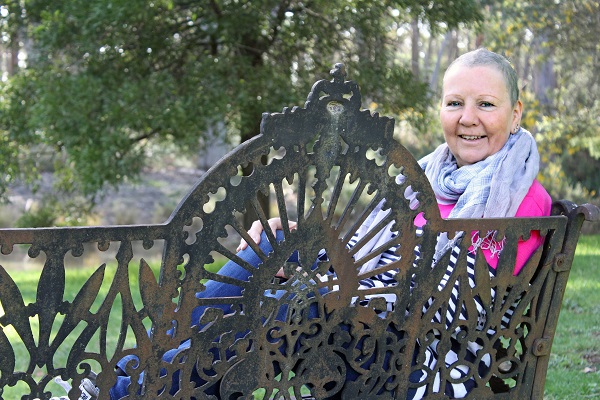 Dignity Therapy gave Joy her voice, according to her daughter.

One patient grateful for the service said, “When I was told that you could help me record some reflections on my life my heart leapt, because it was something that I’ve always wanted to do, but I thought I’d run out of time because I no longer had the strength and energy to do it myself.”

Journalist Jeanette Watt, who volunteered for the program about three years ago, believes that everyone has a story to tell.

“People will say ‘I haven’t done anything in my life and there is nothing special about my story’, but their story is really unique to them and they don’t have to have done what they think is remarkable; it’s just living a good life and sharing those memories.”

She says building trust is key to patients and volunteers getting the most out of the process, ensuring the finished document reflects the patient’s innermost thoughts. It helps too that questions within the Dignity Therapy guidelines have been designed to elicit meaningful responses. She says being able to ask those questions and listen to the responses is a privilege.

“We have people thanking us, all the time, but it is a privilege to be let into a family’s lives at a fairly difficult time, and if we can do something to help them that’s a great feeling.” 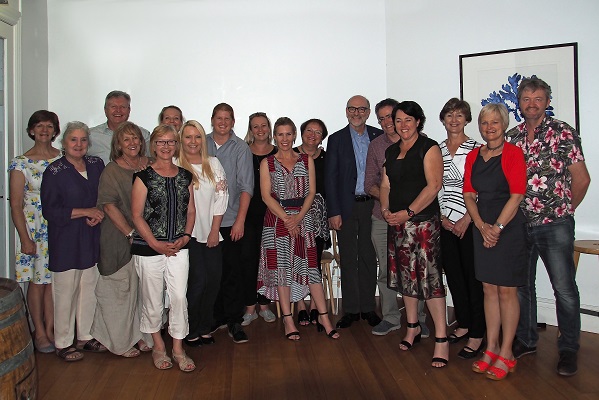 Dignity Therapy volunteers, with Mr Armstrong and Dr Chochinov, fifth and sixth from right, and Jeanette Watt, third from right.

While most books are 10-15 pages and include photographs, the longest was 25 pages. One book, of just two pages, was written with a woman who was very sick and heavily medicated for her pain. She had two young children and desperately wanted to leave something for them.

Mr Armstrong remembers, “Hers wasn’t really a story, but along the lines of ‘I wish to heck I could stay with you but I can’t. I want you to know I’m not frightened of dying, so I hope you find that comforting. I’ve loved you from the day you were born and to the end. Don’t ever forget how much your mum loves you’.”

Mr Armstrong says Dignity Therapy is different to a biography writing service, which is also provided by Barwon Health volunteers.

He says the biography program caters well to people who are keen to tell their many life stories, sometimes with few questions or minimal prompting. While this can involve up to six interviews, sometimes over months, Dignity Therapy is usually a single interview, occasionally two, and finished within two weeks.

He says it tends to be obvious when patients will benefit more from Dignity Therapy, which also helps to relieve existential distress. Those who are desperately hanging on to life and keen to prolong it at all costs are unlikely to want to participate.

It is more useful for patients who have accepted that they are dying and are in the process of trying to make peace with that, and who like the idea of telling their life story but feel overwhelmed by it.

He gives the example of one patient who had experienced a lifetime of trauma. Through the dignity therapy process she was able to leave something meaningful for her children, but also process the trauma she had experienced.

“Dignity therapy gives a chance to tell the stories but in a way that lets the person go a bit deeper,” he says.

“We ask, ‘What did you achieve and what did it mean for you to do that?’. What gave you the greatest sense of accomplishment? When did you feel most alive? What have you learned about life that you want to pass on to others?

“The final few questions are about what they would like to leave as messages of love, thanks or guidance to family or friends.”

Mr Armstrong says he often asks patients to consider that the document will be around for some time, so they might like to say something for their children to consider as they move out into the world as adults or for their partner to read in years to come.

“People offer some gorgeous things for the future,” he says.

The art of the work is using the questions as a framework, in a way that ensures the interaction feels like a natural conversation. It’s also important to respond to the patient’s interests and what they’re keen to talk about.

“Some patients will say right at the outset ‘I’ve had a really crap life and I don’t want to relive most of it; all I want to talk about is what my family means to me and what I want to say to them.”

He says occasionally a patient will want to participate but put the interviews off, sometimes for too long.

“They’ll say ‘I really want to do this, but it is confronting because it means acknowledging that I’m dying and I’m not ready to do that, so not today.’

“Occasionally we miss the window of opportunity because, by the time they are ready, they are too sick.

“More often we miss doing it because we received the referral too late in the disease trajectory, rather than because the patient put it off, so that’s another argument for early referral to palliative care.”

One woman, who had rescheduled several times because she didn’t feel emotionally ready, confided after her first interview that she was dreading it, but ended up feeling  ‘really, really happy’ to have been involved because she found the experience cathartic and could picture her partner and daughters finding solace in the booklet.

“She was right,” says Mr Armstrong.

“I met her partner after she died, and he said he picks it up every couple of nights and he gets great comfort out of it.”

Barwon Health has been given permission to show Palliative Matters readers a sample legacy paper, which can be accessed here.