Volunteer Maddie spends quality time with Marco, who has a rare genetic condition, and his younger brother Lucas, improving life for the whole family.

Marco is 13 years-old and lives with a very rare, life-threatening condition that has resulted in severe epilepsy and an intellectual disability.

“Marco was not developing as he should when he was younger and he was either screaming or sleeping,” says Caterina, his mother. “It took years for medical professionals to identify what was wrong. We were getting almost no support, so we did the best we could,” she says.

Very Special Kids, Victoria’s only children’s hospice and family support, has supported Marco’s family since 2009 and linked the family with trained family service volunteer Maddie, in 2016. Maddie visits regularly and spends quality time with Marco and his younger brother, Lucas.

“It was hard recognising that we needed help but it has changed our lives for the better,” says Caterina.

“Maddie has been part of our family now for two wonderful years. She has given a commitment to us and the boys and we can rely on her. Otherwise it would be a parade of people coming to the house, which is very unsettling,” says Caterina. 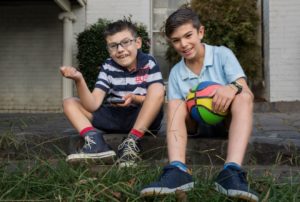 Having fun with Marco and Lucas

“Seeing Marco’s face when he’s out is wonderful,” says Maddie. “Recently we went to see the inflatable Peppa Pig World. We walked in and his face just shone with the expression ‘What is this Peppa Pig World, and why haven’t you brought me here before?’ He was so excited!

“He also loved visiting the Children’s Farm in Collingwood. He was so engaged and talking about the animals.”

Marco’s 11-year old brother, Lucas, has always looked out for his older brother. “We play around a lot and I’m pretty good at making him laugh,” says Lucas.

Very Special Kids also runs special events just for the siblings of children with a life-threatening illness, as so much of their lives can be focused on their brother or sister who is ill.

“It’s been good having Maddie here. I can be myself more without Marco. We usually do things we might not be able to do if Maddie wasn’t here. We have a lot of fun,” says Lucas.

“Lucas is very tolerant of my lack of skills in computer games but he’ll throw a Frisbee with me even though I’m not very good. The siblings I’ve met are a remarkable group of young people. They are very considerate and helpful,” Maddie observes. 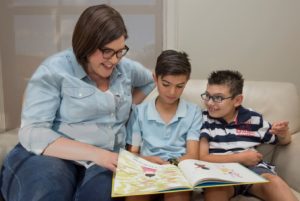 Maddie doesn’t think of her work as volunteering any more: “It’s something I do and we just hang out. Although I spend most time with the boys, Caterina and I sometimes have a cup of tea in the kitchen and debrief about what is going on.”

When Maddie takes the kids out, Caterina and her husband, Matthew, can have a conversation or coffee together. “We are very grateful. Trust is a big thing,” says Caterina.

Marco’s future is a concern for Caterina and Matthew but they don’t let it get in the way of day-to-day life.

“We try to surround him with people who are supportive and loving, so Marco reaches his full potential, and to make sure Lucas doesn’t miss out.”

This article was first published on the Palliative Care Victoria website.