Maurie Voisey-Barlin speaks with a soft, yet very warm voice full of expression and joy.

However, because of the current visitor restrictions due to COVID-19, his “elders”, as he calls them, cannot hear him anymore. For an aged care engagement specialist, this creates a barrier that requires imagination to overcome. So Maurie decided to keep engaging… through the window!

“I was no longer allowed inside, so I developed the idea of interacting with my elders outside, at their windows. Suzie Madden, Service Manager at Whiddon Largs, was the one manager who asked me how I was going to respond given I could not deliver my creative engagement sessions inside. So, I explained what I had in mind & she gave it a go. Suzie was the one who affectionately coined the term ‘Window Therapy’,” says Maurie. 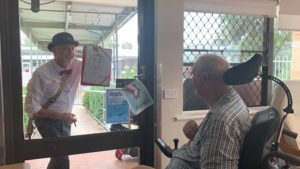 Because banter and intimacy are an essential aspect of his technique, the window could have quickly blocked the interactive aspect of Maurie’s work. His colleague Rob Feldman reminded him that he would need to use the window as a prop instead of viewing it as a barrier. Maurie says “even though it would appear to be a more slapstick approach, ‘Window Therapy’ work still requires interaction, connection, validation, reminiscence and at times a sense of intimacy - all important ingredients. What stands out here is that elders will flash you a look of deep appreciation as they sense you are trying to create some playful, connected & meaningful moments”.

From Theatre to Aged Care

Performance has been in Maurie’s blood even before he graduated from Western Sydney University's Theatre Nepean, having first become involved in community theatre programs with the homeless community and the disability sector. In 2012, he trained with the now-closed Arts Health Institute (AHI) as a Play Up Valet, delivering a humour therapy program. After the closure of the AHI, he went out on his own, hoping to find ways to integrate his practice more deeply and be part of a multi-disciplinary care team.

“I want to embed the work in the culture and delivery of individual care. Otherwise, this is just entertainment. My goal is to walk with those on the last leg of their journey, which may not be imminent, but is a realised reality.”

Maurie, just like most Australians, first thought of palliative care as only being very specialised care at the very final stages of life. His work with older Australians made him part of the greater palliative care family, where he realised the potential of his role. “It is an honour to walk beside an elder as they head towards the last leg of their journey. However, it takes empathy, curiosity, and an open sense of humour,” says Maurie.

“Sometimes it requires validating the feelings of the person or their perception of the situation first. If appropriate and possible, finding the humour in the darkest moment can really shift the room and bond two people in ‘a moment of knowing’, as I call it. A shared sense that we are comrades and both belong. This is when we as humans are closest, when we smile or chuckle together in the face of adversity.” 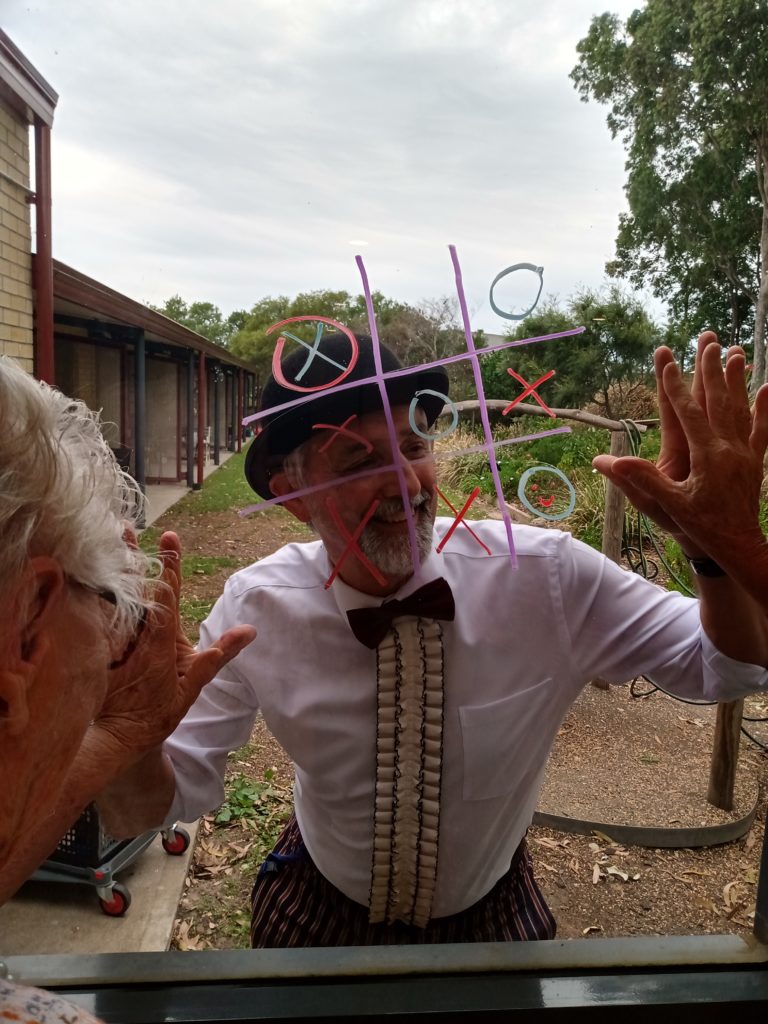 Maurie remembers discussing with a good elder friend, Harry, who he describes as ‘a very hard man’. After a few discussions, Harry unexpectedly spoke about his father, then about his own sorrow after drifting away from his family. Maurie recalls “there was a moment of silence as we held each other's eye and I saw a most vulnerable man. He had a tear in his eye. I should have expected it, but I was taken by surprise. I asked him ‘Is there anything you want me to do when you go mate’. ‘No’, was Harry's reply and he reached out to give me one of those firmly gripped handshakes that come with beautiful deep eye contact.

Harry smiled and with a cheeky grin I asked, ‘Can you leave me your Hawaiian shirt?’ He shook his head, ‘Wouldn't suit you’ he replied with the most beautiful wink and a tilt of his head. At that moment I saw Harry for all he was. In our time together I got the very best of him. He appreciated me saying the unsaid. We spent a lot of time together after this day and we were much closer after it.”

The importance of celebrating life today

Maurie says the most important thing he learned while working in palliative care is that we don’t spend enough time telling people how we feel about them until they go. “You go to a funeral and you hear these amazing stories about people’s lives, their passions and their achievements. Why didn’t we talk about these things or know about them while they are still alive?”

His work in aged care allows him to learn something every day by discussing with people ‘from another time’. “A lot of them have an ‘old-time’ sense of humour, which is priceless and a lost art. My wife jokes all the time that she can’t believe I get paid to be a smart-arse all day! I spend the day provoking responses”. Maurie loves reporting on his interactions with the multi-disciplinary team of carers, helping them break through with some residents.

One of the challenges in his engagement specialist role is to interact with someone who can no longer communicate in a manner which can be easily understood. There is also a big part of his role which is to push some social boundaries to create a greater bond with people. “My job is to find the lines for each individual so that the care team can understand where it is. It’s a bit of a highwire act.”

Maurie’s family has always discussed openly death and dying, and he knows what he wants when his day comes. “When I’m heading off, by my bedside, if it’s not sudden, I want music, banter and laughter. I’ve already chosen some of the photos that I want to be shown at my funeral and the songs. There are a few people I want to make peace with before I get there. Glenn & Matt, I say this for you.”

He believes discussing death openly keeps us grounded, and that previous generations were much more open to this. “We don't do death so well. I recall an elder leaning forward and quietly saying "They die in here & nobody says anything" as she pointed at the empty bed across the room and looked back at me. I remember my mother, living in aged care, saying that sometimes you go to your place at the dining table & the lady who sat opposite you is not there anymore. ‘Why don't they say something’ she said.”

“The intention comes from kindness but in the end it’s patronising. An elder upset that there was no memorial offered for a deceased fellow resident once said to me ‘Makes me wonder if I'll be forgotten when I go’. I think the issue of death is generally a very big gap in today's world. And I think this explains reports about young people who seem oblivious to the potentially dangerous role they play in the potential spread of Coronavirus.”

Upon finishing the interview, Maurie insists on a quote that guides his work from Amadou Hampâté Bâ: Whenever an elder dies, a library burns down. “We need to keep these libraries open for as long as we can,” says Maurie. Even if it means keeping them open from across the window.

Maurie's story is part of our “It’s more than you think” series for National Palliative Care Week 2020.