Home » Palliative Matters » Carers » Having cared for her husband as he was dying, Sarah Winch explains how to do it well

Having cared for her husband as he was dying, Sarah Winch explains how to do it well

Lincoln Winch with his wife Sarah, who wrote a book for people who are dying and their carers.

Dr Sarah Winch (PhD) remembers clearly the day she promised her husband Lincoln that she would write a book. It was a Thursday morning. Two days later he was dead.

Lincoln, 48, had kidney cancer, and with his diagnosis came Dr Winch’s new role as his primary carer. Despite his prognosis, Lincoln had the presence of mind to know others could benefit from his wife’s knowledge and experience.

“There is not really a lot you can do when someone is dying, but I was able to give him the best death possible,” says Dr Winch.

“He knew that. He appreciated that. And that was the last thing I could do, really.

“He felt very comforted and secure.”

Dr Winch wrote ‘The Best Death: How to Die Well’ to better equip people who are dying, and their carers, who she credits as being “without doubt the backbone of the Australian health system”.

She will be presenting the new book next week at Palliative Care Queensland’s Good Life, Good Death Expo in Brisbane (27-28 October). 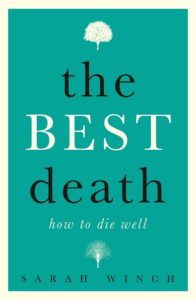 Dr Winch, who studied carer support for her PhD, emphasises that every carer’s experience is different and that in many ways, hers isn’t representative. She had the benefit of 30 years experience as a registered nurse, including some home care, but says that didn’t prepare her for the emotional side of caring and anticipatory grief. Also a surprise was the challenge of maintaining her role as wife, rather than “going into clinical carer mode” while caring for Lincoln at home. She says when you’re focussed on pain relief, washing and changing sheets, it is easy to lose your identity.

Lincoln died in hospital just four months after his diagnosis, so Dr Winch’s time as a carer was relatively short and intense. Reflecting on what she would have done differently, the one thing she would change is the time she spent every day on the telephone.

“People were very shocked [about Lincoln’s diagnosis] and they would ring me in the evening and want to get an update,” she says.

“I spent a lot of time on the phone and I wish I hadn’t done that now because that’s time Lincoln and I could have spent together.”

She knows people who wrote a newsletter updating friends on their daughter’s condition every week, “but I wasn’t in the mood to do that”. Instead, she wishes she’d updated one nominated contact person, who could pass information on.

Another issue was the cost of parking at the hospital. A decade later, she still remembers being hit with an $86 parking fee on the long day of Lincoln’s diagnosis.

More positive was her experience at another hospital where the car park attendant could see when she was upset and would offer to park her car for her.

“I’m not a good parker anyway, and sometimes I was so upset I just couldn’t get into those small car parking spaces. It means a lot, that real kindness when you’re at your wits’ end.”

She remains grateful too, to a friend who announced that she would collect her every night and take her to a chanting meditation session. Her friend knew if she didn’t pick Dr Winch up and drop her home, she wouldn’t prioritise her own needs highly enough to make it happen.

“That was really helpful,” says Dr Winch, who had never chanted before but found it a great way to help empty her busy mind and have time out.

“Carers need to remember that they need a bit of a break; it’s not selfish,” she says.

“If you fall over that’s not good either.”

In her book, Dr Winch says carer burnout is a recognised part of informal caregiving.

“If you are a carer, accepting as much help as you can, as early as possible, is vital for you and the person who is dying,” she writes, encouraging carers to contact Carers Australia, for tips and an information kit.

“When care needs increase, the amount of work required can seem daunting and carers are often emotionally burdened, as well as physically tired.”

Dr Winch says she found it difficult when people asked what they could do to help, because she was so overwhelmed she had no idea and didn’t know what to say. But it “was amazing” when people took it upon themselves to drop cooked meals off to the house, and when her pharmacist personally home-delivered Lincoln’s morphine.

Dr Winch says caring for someone who is dying can come with the added stress of financial strain. She says unexpected costs can mount up, like hiring equipment, travel, and basic essentials like incontinence pads.

She says it’s important for all carers to check their entitlements with Centrelink.

She feels for the many carers who have to manage their caring role on top of paid work, or who need to relocate their entire family so they can live together while accessing treatment.

“As difficult and as horrible as it was, [Lincoln’s illness] sort of came at a really good time of our lives, because I was due long-service leave and Lincoln had sick leave,” she says.

Dr Winch was grateful for little things, like being able to afford good quality cotton sheets and have the time to wash and dry them every day. Given that Lincoln was shy, she was relieved to be able to have him at home where he was comfortable and she was always near.

“I wanted to be with Lincoln the whole time,” says Dr Winch.

Despite being in a relatively good position to be caring, and having daily hospice support, she still found the role was exhausting.

“You go to bed, and you’re exhausted but you can’t sleep because you’re trying to process what is going on,” she says.

“You’ve also got this terrible thing hanging over you, about when they are going to die.”

She can relate to other carers who have said they spent their nights lying in bed listening to their dying partner breathe, and with every change thinking, “Is this it? Is this it?.

“It’s awful because you do that and think ‘What do I do when they actually do die?’.

“That’s why in the book I explain what death looks like because so many people say ‘How do I know when they’re dead?’”

Dr Winch heads the discipline of Medical Ethics, Law and Professionalism at the University of Queensland’s Faculty of Medicine and is CEO of Health Ethics Australia, a not-for-profit organisation that aims to improve death literacy.

In an article published in The Conversation last month, she outlines three common myths about dying. Number two is that dying at home means a good death.

Dr Winch tells Palliative Matters she is cautious about the push for people to be able to die at home.

“There is a romantic ideal that dying at home is best, and it may well be, but it’s not a walk in the park.

“There is a lot of work and organising involved and it can be highly stressful.”

She says she recently spoke to a carer who had hoped to support his dying wife at home, but when asked to learn how to re-site her syringe driver “he just couldn’t; there was a limit in his mind” so his wife died in a hospice.

“I’ve seen some wonderful deaths at home, and some less wonderful, that haven’t been managed well. There’s no shame in opting for a hospital death.”

She says while hosting a radio talk-back session recently, a caller said they were one of eight siblings who were all supporting their dying mother.

“That is great, but most of us aren’t going to have that level of support, and being realistic about carer support is important.”

She says at least one resident carer is generally needed to support someone dying at home, but many Australians live in single-person households.

“While it may be cheaper for the health system for people to die at home than hospital, you need to support them properly, and if someone wants to die at home without a carer, it is usually more expensive than dying in a hospital.”

She says the carer role can test relationships, and even those in long-term marriages may find the caring role too much.

“The burden is harder if you don’t love the person and not every relationship is a strong relationship; people stay married for all sorts of reasons,” she says.

“Then one of them becomes ill and the other person doesn’t want to do that caring, or it might be an abusive parent-child relationship. The whole caring role is built on the happy-families model. You may well have a happy family, and we did, but I know not everybody does.”

During her PhD, Dr Winch researched spousal caring of the aged. “One carer said ‘I promised to look after him in sickness and in health, but had I known how bad the sickness part was, I never would have got up in church and said that’.”

Dr Winch says some carers experience a short-term sense of relief when their loved one dies before grief sets in. For most people, the grief is unfathomable until they have experienced it.

Dr Winch and Lincoln’s daughter was 12 when her father died. She has since explained that she didn’t really understand anything that was going on at the time.

“She knew her Dad was going to die, and she knew she was going to be sad, but until you experience it as a 12-year-old, you don’t know that level of despair exists,” says Dr Winch.

“I don’t think anyone does.”

Dr Winch describes grief as being a process, not an event, and says that while some people feel better in a year, for others it may take many years. It takes time to adjust to loss, and grieving carers need to be gentle with themselves.

Dr Winch still thinks of Lincoln every day, now with joy rather than sadness. She is grateful that she met him, that they had 23 years together and have two, now adult children.

She remembers his wit, energy and fierce love for his family and children.

“He was patriotic, particularly about Australia’s sporting teams. He had a clear-eyed view of the world, a love of words and writing and a strong sense of right and wrong,” she says.

“These characteristics were evident at the end of his life.”

While Dr Winch taught Lincoln about death and dying, she also learnt a lot in their intense final four months together.

“Caring can be emotionally and physically exhausting, but it can also be an absolute privilege,” she says.

“There are very few comforts when someone you love dies, but caring for them at end of life – at home or in hospital – and helping them get a good death is one of them.”