Brian Chaffer was 84 and he knew he was dying. He didn’t want to die in hospital. He wanted to die at his home of 12 years.

For Brian, home was a unit in a retirement village, where he knew all his neighbours, filled his days watching the History Channel on Foxtel and wandered up to the nearby RSL where he’d been a member for nearly 50 years to have beers with his mates.

However, Brian’s home wasn’t set up to care for a man with complex pain as he entered the last weeks of his life.

Brian’s friend of 47 years, Bob Connors, remembers his mate being stressed by any loss of independence and upset during many admissions to hospital in his last 12 months.

“He was cranky as a bull in a china shop,” says Bob, who stood by Brian throughout his illness and was by his side in 2015 when he learned he had lung cancer.

“He got very agitated in hospital because he had to share a room. He had three people who passed away while he was there and that really took a toll on him.

“He didn’t like being in hospital at all. All he wanted to do was go back to his old little room and watch Foxtel.”

Watching on was hard for Bob, who was a decade younger and considered Brian to be family; “He was a buddy, my mate. We were more like brothers.”

Knowing how desperately Brian wanted to return home, Bob managed to achieve an unlikely compromise that made a huge difference to his friend’s sense of wellbeing during his final weeks. Located next to Brian’s retirement village in Forestville, Sydney, was Living Care’s Alexander Campbell House, an affiliated residential aged care facility with private rooms and views across bushland.

Alexander Campbell House has traditionally accepted ‘ageing in place’ residents who are frail and need assistance with activities of daily living. It offered more support than Brian’s retirement home and had a full-time registered nurse, but not overnight. That meant the facility wasn’t equipped to support residents like Brain who had complex pain management needs.

Director of nursing and facility manager, Jose Rigor, said these patients were transferred to a nursing home or hospital. But with the support of Brian’s GP and a visiting HammondCare palliative care nurse, Brian became the first resident to receive palliative care from the time of his admission.

“Brian was quite different in that he came here to die and with the specific request that he be looked after palliatively,” Jose says.

“He chose us because we have a home-like environment, not far from where he was living, and it didn’t look institutionalised.

“What made it special for us is that he was the first resident we could receive on that basis when residents in his position would traditionally move to a nursing home or hospital. We were able to provide that care for him in collaboration with a palliative care nurse.” 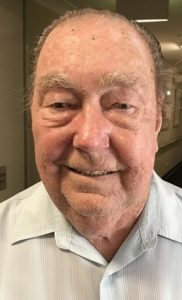 Bob says Brian still wanted to be independent. He didn’t want to talk to “all the old people” living at Alexander Campbell House, and so initially enjoyed being able to walk back in his retirement village unit to watch telly, returning to his new room at night.

That drive for independence was one of the first issues that palliative care nurse Kelly Arthurs needed to address. The clinical nurse consultant with HammondCare Northern Beaches Palliative Care Service, says it took some time to build Brian’s trust so that he understood concerns about him having a seizure or a fall in the unit alone, and how his health was likely to decline over the following weeks.

“He was very independent and wanted to stay in his independent unit, so we had a lot of discussions with him being more realistic about his care needs in the not too distant future,” Kelly says.

From the time of Brian’s admission, Kelly visited every day. She met with Brian’s GP “who was great but not doing palliative care every day so he needed a little bit of guidance”. She worked with the registered nurses, building their understanding of the syringe driver which was needed to keep Brian pain free, ensuring medications were available and teaching staff about mouth care and how to avoid pressure sores.

She also organised a one-on-one carer for Brian through the NSW Government’s last-days-of-life home support services.

Kelly says the carer visited twice for about three hours at a time, giving Brian additional attention and reassuring visiting friends that his symptoms were normal. Her attention to detail, in turn, helped to upskill nurses and carers.

She says Brian had a constant stream of visitors to support him during his final days.

“He had that many visitors who came through. He had this gorgeous room overlooking the bush and they were all saying how it was so much nicer than him being in hospital.

“I overheard two ladies who were saying they wouldn’t mind dying there too, as it was quite lovely.”

Brian died on Friday 10 March, pain-free, settled, comfortable and where he wanted to be.