Providing palliative care for people who are homeless; attempting to break down barriers

Katrina Recoche (second from left) with other volunteers after serving 50 cooked breakfasts for people who are homeless.

Katrina Recoche was a palliative care nurse when she first became interested in homelessness about 20 years ago. Now a senior lecturer at Monash University’s school of nursing and midwifery, her key research interest is palliative care access for people who are homeless or disenfranchised.

Ms Recoche presented at the Palliative Care Nurses Conference in Canberra on whether public documents act as facilitators or barriers to palliative care access for these groups. She said 105,237 people in Australia identify as being homeless – more people than can fit into the Melbourne Cricket Ground. Of those, 60% are younger than 35 years old.

What sparked your interest in homelessness?

About 15 years ago, I was giving up smoking and so went for a walk at lunch time to distract myself. I was working as a district nurse in Frankston, Victoria for a service that provided 24-hour nursing coverage for a hospice.

I walked down towards the main drag and I remember seeing a whole lot of young people who were drug affected and young girls with babies in prams. I thought “This is not okay”. I really believe society is measured by how it treats its weakest members.

There was an election pending, so I went full of fire to my local member and said “What are your plans? This is not okay. There are all these vulnerable people out there and we are a wealthy society. What is going on?”

That’s how it started.

What did you do?

I heard about the Frankston Combined Churches Community Breakfast Program which had been put together by three of the big churches locally.

I went along one morning and I thought “This is really for me”. Cooking bacon and eggs was a good, practical thing that I could do.

Folk just turned up and had a fully cooked breakfast with coffee and juice and cereal at no cost. They also offered shower facilities. Colleagues and students at Monash University have supported this by collecting toiletries when they’re travelling or buying extra personal hygiene products each time they shop. That means we could offer not just soap and a towel, but also a toothbrush, toothpaste, shampoo and conditioner. There was also clothing if folk needed it. That was terrific. 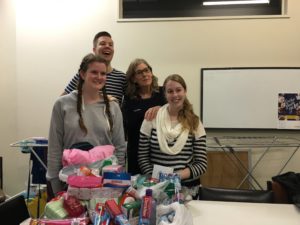 Katrina Recoche (third from left) with students and donated toiletries.

It was a very clever organisation, in that once I decided to be part of it, they only allowed me to volunteer once a month. I wanted to do more, but they said people get really enthusiastic in the beginning and then over-commit. It was a great strategy. After all these years, I’m now on their committee of management.

I also got involved with another homeless organisation on the peninsula that offered evening meals, largely helping them with funding applications.

Some patrons were living rough, on the beach or in parks, but a lot were living in transitional housing, awful boarding houses and caravan parks. They came because they were lonely and broke.

Unfortunately, both services I volunteered for haven’t been operating for the last two months because their premises have been sold to developers. We’ll get them back up. We just need to find a space.

What did you learn during that time?

I spent a lot of time speaking with people and I was constantly knocked on my butt with the things they had been through. Some people had horrible stories of inter-generational disadvantage.

People seemed to be quite unwell at much younger ages and developing chronic illnesses earlier too, which is supported by the literature.

There was one guy in particular who I had known right from the beginning. He was always very kind and polite and over a 12 month period he stared to fade before my eyes. He became more and more frail and I didn’t see him for a while. When I heard that he had died, I was sad but not surprised. He looked like he was in his 70s or 80s but it turned out he was only forty-two.

His death set me on a path where I would talk to people about their pre-existing health issues. There were common threads affecting why homeless folk weren’t as healthy and resilient; poor living conditions and nutrition and sometimes smoking, drinking and using substances wasn’t helping.

Some people would get to a doctor and be diagnosed, but others chose not to go for lots of different reasons – maybe fear of judgement, being asked to do things they didn’t want to, or feeling like people were prying into their habits.

There are some incredible challenges in caring for somebody this vulnerable. Anyone who has palliative care needs is vulnerable, but when you have homelessness and the problems that accompany that, they are doubly so.

Did you get to make a difference?

My biggest dream was to get students from Monash University, where I work, involved in providing nursing, medical and physiotherapy services. I worked hard for four years to get that up. Colleagues and community members fundraised and we pulled together some consulting rooms for the students to work from, and got more showering and laundry facilities.

We linked in with a program focussed on chronic disease management, legal aid and Centrelink, but unfortunately it didn’t happen to any great degree and the premises was sold. It is disheartening, but it’s always swings and roundabouts – you can’t give up.

What is your academic work focussed on?

I identified that some homeless people weren’t utilising publicly available health services, either because they weren’t acceptable or accessible. So I wondered about what happened when they got to the palliative phase of their illness. Would they all of a sudden have an epiphany and decide they would accept all services, or what happened?

I found that there was no systematic approach to making palliative care services available to people who don’t fit traditional paradigms. Some accepted options made available to them. Others persevered with managing their health challenges independently and found themselves in an acute care setting at the end of life.

I also wondered whether there were issues around the way that organisations promoted themselves which might prevent people from accessing their services. My PhD is looking at government and peak body documents and policies and the discourse contained in them.

I’ve found some of the barriers are overt, like not having somewhere in a boarding house to safely store drugs, or presuming that people have the ability to make and keep appointments or follow directions. The actual voices of homeless were largely absent from the discourses and many assumptions are made about who is homeless, and the choices and barriers that affect services being accessible to them.

I’m still writing the findings up but I hope to finish by the end of the year.

Has your contact with people who are homeless largely been through volunteering?

About six years ago Monash University sent me off to the US so that I got to understand homelessness better from an international perspective. I visited Skid Row in Los Angeles, where I was really shocked to see the number of people who were homeless and how tough their lives were. I thought things were terrible here for people who were homeless, but that experience really blew me out of the water.

When I was on that trip there was a furore because a homeless person had been discharged from an emergency department and back onto the streets of Skid Row, where he died. Services over there rely on philanthropy and there’s nothing like the safety net we have here – when I tried to explain our health system they couldn’t comprehend that you could go to the hospital without having to pay money.

I got to interview one of the managers of Common Ground, which at the time represented a new approach to managing homelessness. Rather than being a shelter where you could get a hot meal, they took over an abandoned building and set up a one-stop shop where people could learn social skills, work readiness skills, and get counselling and mental health support. Lessons from the US have informed the Australian Common Ground Alliance.

From what you’ve seen and researched, what would help to make palliative care more accessible?

There has to be an enormous amount of flexibility. You have to work with people’s needs on a case-by-case basis, have a great deal of openness and let go of judgement.

Staff who work in homeless services are well and truly the experts and the palliative care sector needs to look for the chance to work with them collaboratively. It comes back to breaking down silos and building cooperation between different services.

There is a lot to be learned from a case study called ‘Reaching out to Ray: delivering palliative care services to a homeless person in Melbourne, Australia’. It speaks to the complexities of facilitating care for vulnerable individuals, and the challenges of piecemeal service delivery being able to meet only pieces of an individual’s overall needs. It also shares some of the successes that occur when services collaborate.

What impact has your focus on homelessness had on you, personally?

I’ve got better at slowing myself down, rather than reacting to things immediately. I now wait and see how things develop before jumping in. That’s been a big learning.

Sometimes it seems people have such horrible lives and yet what is incredible is that they can find joy in things. That is amazing.

It is always a privilege if you can help other people. It helps you step outside yourself and realise there are much bigger things afoot than your petty vexations.