Vickie Hartland feels great responsibility being entrusted to make bears from the jeans worn by a loved one who has died.

Vickie Hartland experienced an intense period of grief about 10 years ago, with the death of seven family members over just two years. It started with her brother dying an unexpected death in an accident, aged just 37, and ended with the death of her three-month old granddaughter, who was born with spinal muscular atrophy.

As she and her family worked through their grief, Vickie was moved to hear that her youngest nephew had started sleepwalking. For many years after his father’s death, he would wake up curled in a wardrobe under his father’s clothes.

For Vickie, it made sense that he would instinctively want to be near something that smelled reassuringly of his father. She knew it brought great solace to her sister whose husband died decades ago; she keeps his work uniform and a pillow sealed in plastic which she occasionally opens in order for her sense of smell to bring back fond memories.

That then explains then why Vickie would never head to the washing machine with the precious pre-loved jeans that she is entrusted with. And why she has such a big impact on people who are grieving through her “accidental business”, making personalised denim bears from stretched, faded, torn, well-loved favourite jeans.

“It is a totally accidental business. I cut up an old pair of my jeans to make a bear for my grandson when he was born, just as I had done for my own son and daughter more than 20 years ago. I put a picture on Facebook and I got 70 orders from all over the world.”

Overseas orders continued after she started a stall with her handmade bears at markets in Cairns, with cruise-liner tourists taking her card and sending their loved ones’ jeans from afar. Within months of starting her business, she’d been sent pre-loved jeans from places as far afield as Sheffield in England, California in the US and Prague in the Czech Republic. 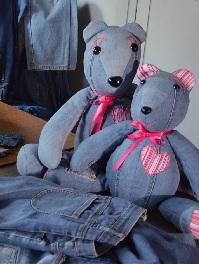 Each Comfort Bear has a unique personality.

She says she tries to make the bears with the same coloured eyes as the person who is being missed. Sometimes people also give her small mementos, or a small bag of their loved one’s ashes, to stitch inside.

“Every single bear had a unique personality because every pair of jeans is unique,” says Vickie. You have to muck around with the pattern and where you place it means you might get a little square face or round face, or a snub nose that goes up or more down. When the denim is stretched you might make a little fat bear.”

She understands the trust that grieving people place in her, handing over their loved one’s clothes, so it’s hugely rewarding when they recognise the person they are missing in the bear that she creates for them.

“Sometimes when you finish a bear and pick it up you can just feel the love,” says Vickie.

“There seem to be a lot of young men who have passed away in bike or car accidents, and turning their jeans into bears helps their mothers and girlfriends with grieving.

“One lady came to me on the 10 year anniversary of her dad dying and she still had all his clothes. I made three bears out of his clothes – one for her and one for each of her two sisters – and she was able to let go of the clothes then.”

Vickie was interestedto learn that animals have also responded to the bears.

She says one grieving man was surprised by the reaction of his dogs when he received a bear made from his wife’s clothes.

“He said the dogs started barking like crazy, so they all crawled up onto the bed with the bear and slept with it together. Animals grieve as well and I hadn’t even thought of that. Every week I learn something new.”

Vickie says sometimes new dads bring her jeans, wanting a bear to be made for their new baby so they can pass on more than their genes, and she’s happy to oblige. She also makes bears from jeans that are donated to her, for people who don’t need their bear to be personalised.

“But working on the grief side of things is what I really seem destined to be doing,” says Vickie.

“I’ve experienced a lot of grief and loss in my life and it has taken me a long time to work through it. It’s just so rewarding to be able to help others. I only wish that I’d started doing it years earlier.”