Cassandra Thorburn is appearing on Dancing with the Stars

Timing is a funny thing. Sometimes in life we are thrown opportunities when we least expect it, pushing us in a completely new direction. This was certainly the case for Dancing with the Stars (DWTS) contestant, Cassandra Thorburn who received the  offer to appear on the hit reality show in October 2018 – only two days before her beloved father Max died at home in Mildura, Victoria.

“I got the call from DWTS only two days before Dad passed away. I was at home with him, and obviously it was a very emotional and difficult time for everyone, so something like this was the furthest thing from my mind. I was just sitting with Dad at his bedside, chatting and I told him about the phone call and how I thought it could be amazing, but I wasn’t sure I could do it.

“He was near the end and not able to have full conversations or speak in sentences at that point, but he looked at me and said quietly ‘no regrets’.

“I knew exactly what he was trying to say. He wasn’t telling me to do it – just saying to grab opportunities in life and to back myself.

“I think if I had turned it down I would have regretted it. Maybe 6 minutes later, 6 weeks or even 6 years… who knows? You never know what’s going to happen in life, or when an opportunity might come around again.

“Of course I had doubts and that fear of failure. I’m a single working mum of three and in my 40s – you don’t often get a chance to venture out of your comfort zone, take a chance and try something completely new. So I said yes, and it’s been fantastic; so much fun!”

On agreeing to be part of the show, Cassandra was asked to nominate a charity of choice (the winning DWTS contestant receives $50,000 for their chosen charity). Given what her family was experiencing at the time, Palliative Care Australia was an immediate and easy choice for Cassandra.

“Dad had spent long periods in Melbourne receiving cancer treatment since he was diagnosed. It was very hard on him, but he was such a positive, determined person. Then he called me and said ‘I’ve fought as hard as I could’… he knew he was getting close to the end and he just wanted us to get him back home.

“If it wasn’t for local palliative care services in Mildura, returning home would not have been possible for Dad.” 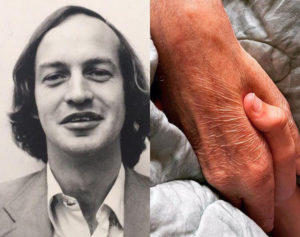 Above: Cass shared this touching photo of her dad on Social Media when he passed away in October 2018.

Max Thorburn had lived and worked in Mildura for over 50 years and was a well-known community advocate, journalist and founder of the Mildura Country Music Festival. In the last ten years of his life he also served as a prominent Mildura Councillor.

“He loved this community and was massively involved in so many areas. To be given that choice to return to the home he loved, be surrounded by his friends and family at the end, was just so important to Dad.

“The Mildura Palliative Care Service staff were amazing from the start – and my family will always be so grateful they were able to help us honour Dad’s decision to die at home.

“They would talk to us and explain what was going on; what it meant for Dad, about the medication and what we could expect to happen.  They were happy to stay and have a cup of tea and just talk – preparing us for the road ahead. We never felt like they were too busy to answer our questions, or that we were taking up too much of their time – which can sometimes happen in the hospital environment.”

Cassandra said that the availability of local palliative care support in Mildura empowered her father.

“One of the hardest things for Dad about the diagnosis and subsequent treatment was the loss control in many ways. The disease decides when it strikes, and from then many decisions are out of your hands. For a man like my Dad who was so strong and independent, that was incredibly hard. So to be able to give him the power to make that final important decision about returning home to receive care at the end – to give him some control back – was amazing and something we were so grateful for.

“I’m still a country girl at heart. Country people understand that it’s just not possible to have specialist medical services, like cancer treatment, available in every regional centre. Travelling for treatment is a reality of country life. But to be able to know that you can get access to high quality palliative care services outside of the capital cities, and give country people more of a say about how they receive their end of life care is so valuable.”

The entire DWTS experience has been a rollercoaster for Cass, with training up to 6 hours a day and a gruelling schedule of filming, rehearsals and publicity.

“I’m not a dancer so it’s a completely new experience for me. The fitness level, skill and the technicality of the choreography – especially the ballroom styles I’ve done so far – is just incredible,” she said.

Feedback from her friends and family has been and the general viewing public has been overwhelmingly positively – especially over social media.

‘It’s been great. I’ve actually received lots messages of support from the public, especially from other single mums who can see I’m doing my best and just giving it a go.”

A qualified teacher, experienced journalist and published children’s book author, in recent years Cassandra’s life has come under public scrutiny following her divorce from high profile broadcaster Karl Stefanovic. So this DWTS opportunity has given Cassandra a chance to step out into the spotlight and be seen in her own right.

“I’m having so much fun and just enjoying the ride. I know Dad would be proud of me. To be able to have this amazing dancing experience and then use it to honour my Dad and raise awareness about palliative care – especially in regional areas – is special. I feel very lucky.”

Dancing with the Stars airs on the Ten Network. 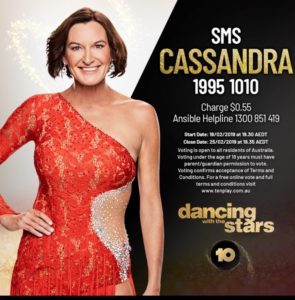