The work, titled ‘Dying For A Cuppa’ was made by Karen Benjamin who works at a funeral home, where she makes a lot of cups of tea for people who are planning a funeral or grieving the death of a loved one.

“At times, the grief seems overwhelming,” says Karen, who will receive $1000 in prize money.

“The gesture of a cup of tea and the chance to speak openly about death and dying soothes the soul.”

The theme for this year’s competition was Connection with Community. The award was judged by two previous winners, Ashley Fiona and Anzara Clark, and artist Margaret Ambridge whose work is being exhibited at the Australian Palliative Care Conference in Adelaide next week.

Ashley says she had no idea what the dress was made of until she read the artist’s description on the work. In light of the competition’s theme, she enjoyed that the dress so cleverly captures a simple ritual that brings comfort and connection.

“When people are in a sad frame of mind, they go for a cup of tea because it is like a warm hug; a nourishing warmth that you ingest and it makes you feel a little bit better,” says Ashley, who won the competition’s People’s Choice award last year. 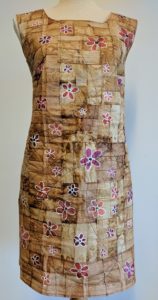 ‘Dying For A Cuppa’.

“I thought it was pretty powerful for Karen to have been of service in that way to so many families in need of some tender loving care and then to turn that into an art work.”

Having made art work with tea bags herself, Ashley says it is a fiddly, messy business.

“It looks like it has been a labour of love. To me, with the sewn texture that you could see, it was almost like a patchwork quilt – a blanket of love that is in fact a dress. It is a beautiful way to weave memories into an artwork.”

Anzara, who was the overall winner of the competition last year, says it was fascinating to judge the 46 art works submitted this year and to see the great variations in how entrants approached the theme.

She says ‘Dying For A Cuppa’ was her favourite, and was strikingly different from the other entries. Because it was in the form of a dress, the work had “immediate presence, as though it was a de facto person”.

The irregular tea stains gave the garment pale tones through to dark browns, which appealed to Anzara as a metaphor for life’s light and dark moments. Just as life’s experiences can be wearing, many of the tea bags were worn too.

“When I found out where the materials had come from and what inspired it I thought that was just perfect for the theme,” says Anzara, who was impressed with the authenticity of the tea bags having been used by grieving families, and providing a genuine connection to them.

A painting which captured how isolating it can be to live with a terminal illness was judged online by the general public as being most worthy of the People’s Choice award, also worth $1000.

‘A Light Touch’ by Kerrie Marriott Anderson also speaks to the valuable support that comes through community connections.

“Living with a terminal illness and grief can feel like living in a bubble,” says Kerrie, who likens the isolation to an invisible barrier which can offer protection but also prevent emotion, conversation, love and support from being shared.

She depicts a woman curled in a bubble with her arm extended, holding hands with someone reaching in from the outside.

“Just holding hands, be it clinging tightly by finger tips or gently held can provide support and care with a wrapping of light, colour and warmth,” says Kerrie.

Kerrie’s work resonated with many Palliative Matters readers, including Dianne Crooks who says she nursed three family members at home as they were dying.

“I witnessed the bubble they were in often and knew constantly that only physical touch they could experience was the feel of my breath or touch of my hands,” she says.

“It was the dance of life and death, knowing when I had to loosen my grip and when to hold firmer. The letting go and holding on unfolded between us until the last breath was taken. Amazing memories and this painting symbolised that for me. Kerrie got it right on!”

“I see and feel my daughter is in the bubble, feeling withdrawn from the world… from the grief of losing her son.”

To Maree, the image captured the way she, as a mother, reached out to her daughter to protect and guide her to the safety of her arms.

“Learning to float is something that looks easy but takes a lot of effort to learn how to let go and trust the support of the water,” says Shara.

“In the same way, learning to trust community support can take a lot of time and effort, and be very frustrating at times, but when you get it right, and learn to trust and accept that strength and support, oh what a difference it can make.”

Shara will enjoy the kudos of her work featuring on PCA’s marketing and promotional materials.