An unorthodox research project which films palliative care staff as they go about their day-to-day work has proven more valuable than expected, despite participants’ initial reservations.

Community care nurses working within the South Western Sydney Local Health District were initially uncertain about being filmed by researchers from the Western Sydney University’s school of business.

Palliative care clinical nurse consultant, Kerrie Womsley, confessed she rolled her eyes in horror at the prospect. Some staff were concerned they were being spied on. Other felt it was pointless exercise, because they were already performing well. 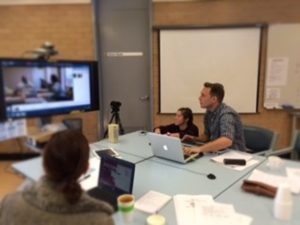 More than 65 hours of footage has been taken of palliative care clinicians as they work.

However, watching the edited footage has provided staff valuable opportunities for reflection and learning, improving both work satisfaction and morale.

“Because our staff typically work in isolation, visiting clients in their homes, it gave them a rare opportunity to stand back and watch themselves and their colleagues in action,” Ms Womsley told Palliative Matters.

“They are not always privy to the brilliant work their colleagues do. This was a way for them to respectfully peer into that world. It also sheds new light on what otherwise might be routine to them.”

The project is funded by the Agency for Clinical Innovation and was presented at the recent Palliative Care Nurses Australia conference in Canberra.

It is being led by Dr Ann Dadich (PhD), senior lecturer at the Western Sydney University school of business. Dr Dadich described the research technique as “video reflexive ethnography” and said the project focussed on what is working well, rather than looking for faults or problems.

The research aims to explain how knowledge – derived from experience, clinical guidelines, journal articles and interactions with colleagues – is put into practice, influencing decision making and patient interactions.

Since August last year, Dr Dadich and a team of researchers have taken more than 65 hours of footage while shadowing staff delivering care in people’s homes, debriefing and reflecting during car trips, interacting with clients, carers and other staff, and liaising with other services.

Researchers then viewed the footage with the clinicians involved and discussed what occurred and why.

“They have this amazing capacity to positively deviate and overcome those challenges ultimately to benefit the client, family members and the team.

“The brilliant practices these clinicians are known for don’t magically happen.

“It requires a mix of factors in the clinician and the service and the system and the client’s home. We are trying to understand that mix a bit better.”

Dr Dadich said the process has had spin-off benefits that weren’t anticipated at the start.

She said it has enabled clinicians to identify themes. Sitting around a computer screen and assessing the footage, they were surprised to note that clinicians appeared to be part of the family when they entered clients’ homes.

“They knew where the bin was in the kitchen and which cupboard to get a glass out of when getting water for the patient,” said Dr Dadich.

“Even though it was a stressful time of life for the people they were visiting, they helped to provide a sense of normality.” 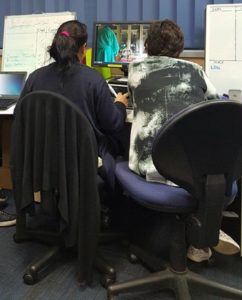 Another observation was that staff had an incredible ability to quickly change their focus. Having left a workplace with many competing priorities and driven to a client’s home, they were able to leave behind workplace issues and focus entirely on what clients and carers wanted.

“They had an ability to partition the rest off for a while.”

Footage also captured a very capable clinician offering a client advice on pain management over the phone. During the process, she consulted with a senior clinician, who offered additional advice. Viewing the footage later, the team was impressed that the clinician felt comfortable seeking support.

The footage also highlighted how much reassurance and praise staff give carers and the impact this had on carer morale. She said when clinicians received praise from carers or clients, the clinicians typically reminded carers that they were filling an important role for the other 23 hours in the day.

Spending so much time with people working in palliative care has left Dr Dadich moved by their commitment.

“There is a lot of rhetoric about offering patient-centred care, but they embody it and have a genuine respect for the poignant moments of life.

“They see it as an honour to be there at the closing stages of someone’s life. They are greeted with a warm hug when they enter the home, because these people feel genuinely cared for. There aren’t many health professionals who are greeted with a hug, particularly given that it is at such a confronting, sensitive and sacred time of life.”

Michael Hodgins, research assistant, Western Sydney University school of business, has also taken an active role in filming and editing for the project.

He says he often found it confronting to visit homes where people were receiving palliative care.

“I remember walking into a home visit and this client was going through significant physical and emotional trauma anguish pain. The palliative care clinician I was with threw her bag down, and knew exactly what she had to do. She was so on top of things.

“From a personal perspective, I was dumbfounded and amazed. I was in awe of her ability to manage the chaos. When we talked about it, she said she was as confronted as I was, but she knew she had to swallow that and get this person as comfortable as she could.

“That is something that will stick with me for the rest of my life.”