Home » Palliative Matters » Health professionals » Nurse committed to residents being able to die at home, away from hospital emergency departments

Nurse committed to residents being able to die at home, away from hospital emergency departments

Having worked as a nurse in a hospital emergency department, Melissa Millar has seen first-hand the trauma that can occur when someone who is dying an expected death is put in an ambulance. It’s something she is keen to avoid in her new role at a Sydney aged care facility.

Having worked in a hospital emergency department for 12 years, Melissa Millar has no trouble recalling sad stories about elderly people arriving by ambulance. Rather than being able to die an expected death at home, which was often a residential nursing facility, they were transported to hospital to die.

“One time was absolutely horrendous,” recalls Melissa, a registered nurse.

“A lady who was 101 was in the ambulance, on a trolley. She was at the very last moments of her life, but the nursing home could not be convinced to let her stay there.

“She died within an hour [of arriving].”

“All the [accident and emergency] staff were absolutely appalled. That is just one of many, many examples. I remember saying, many times, ‘Why are these people not dying at home?’.”

In February this year, Bupa opened a new 76-bed aged care facility in Seaforth, Sydney, and Melissa started in a new role as clinical manager. Within weeks a resident died an expected death at the facility. While staff had anticipated her death and prepared for it, the death came as a shock to the resident’s family.

“They were of the mindset that [their] mum was going to be here for a long time,” says Melissa.

“Her death was comfortable, but we felt there was more we could do, especially to support the families. I could see that we needed to be proactive and start getting more education for staff, so they felt empowered and could then support families better.”

“Our cleaners have a lot to do with our residents and have some lovely rapport,” says Melissa.

“Part of our plan is to empower all of our staff to notice changes and feel they can come forward and say to the RNs (registered nurses) this person is doing this and it doesn’t look right.

“It also opens staff members’ eyes to understand why people stop eating, why they start sounding noisy and gurgly. When they are not afraid of it, they can focus on what we can do for comfort — not just for the resident but also their relatives, so they understand their loved one isn’t in pain.”

She says staff who don’t have a clinical background are now piecing together subtle signs; noticing when a resident’s appetite has declined, they’re less mobile and sleeping more. Recognising when residents are entering their final weeks of life enables them to be more vigilant in preparing to make the process of dying as calm and dignified as possible.

“It also gives us time to get the relatives prepared,” says Melissa.

“Even when people are 90 years old, relatives sometimes think they are going to live forever.

“We needed the support of the relatives because it’s a transition for the person dying and so it’s important for relatives to understand and accept what is going on.”

Melissa says no-one should die alone. When family members need a break, or residents don’t have friends or family nearby, staff or trained volunteers sit to hold their hand and offer company. And comforting lighting, fragrance and music can be offered with palliative care boxes, located on each floor of the facility. 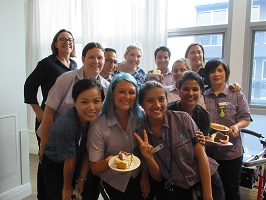 Residents’ end-of-life wishes are documented and their medical needs are anticipated. Melissa works closely with the facility’s GP, who knows each of the 76 residents. They predict what medication may be required, order it under the resident’s name, and keep it on site. The facility has a syringe driver and medication for secretions in stock.

“We don’t’ want to bring in a random doctor who doesn’t know these people,” she says.

“Our idea is hospital avoidance whenever possible and to treat within the home.”

Melissa says a care manager was concerned that the body bag used by funeral directors was not adequately dignified, so staff now place a dedicated blanket over residents as they leave the building for the final time. Staff have the opportunity to say goodbye and participate in a debrief session if there is anything concerning them.

“The girls here need to debrief because they are so involved in people’s lives. Some of them haven’t dealt with death before, so I tell them some of the little things I do to be able to get through, so you don’t take it home with you and have it brewing.

Melissa, who has been nursing for 22 years, says it took her a long time to understand that it is okay to cry in front of relatives.

“It allows you to let go; because you can keep everything so tight and wound up.

“It is okay to take a moment and have a cry with the relatives; to give them a hug, and say farewell with them.”