Sally and Mick McAuliffe with their children. Conor, who died of cancer, is sitting on Sally's knee.

A new online video offers a short, animated version of the book By My Side: Stories of parents whose child has died from cancer. One of the 13 parents quoted, Sally McAuliffe, tells Palliative Matters how important it is for grieving parents to have access to others’ insights and experiences.

He came to her saying his tummy was sore, so she suggested he go to Daddy for a tickle because that would make it better. Mick McAuliffe, an orthopaedic surgeon, was concerned his son’s liver seemed enlarged.

Conor was tested for leukaemia, and given the all clear, only to be called back to the hospital the following day by a concerned consultant who ordered an ultrasound of his liver.

“The radiologist came in and said ‘I’m very sorry, but your son has liver cancer’,” says Sally, who was 32-weeks pregnant at the time.

“Another scan that afternoon found cancer in his lungs.”

At the time of his diagnosis, Conor had stage four cancer. 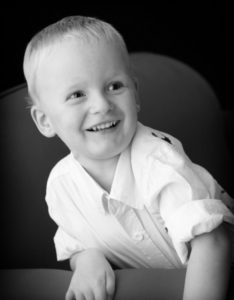 Conor McAuliffe had stage four cancer at the time of his diagnosis.

The family, then living in New Zealand, sold their two cars and packed up their house in less than 24 hours. They moved back to Brisbane, to be with extended family, renting a house 200m from the Royal Children’s Hospital in Brisbane.

After 15 months of intensive treatment, Sally and Mick were told that Conor wasn’t responding to chemotherapy and there were no other treatment options available.

They took Conor home, supported by hospital nurses who would drop in on their way to and from their shifts.

“It was a short palliative phase and we were very well cared for by those at the hospital who had known us for the last 15 months,” Sally says.

“And my husband being a doctor helped, because he could administer morphine.”

“We had 10 days at home with our little man and he passed away in our arms while we were reading a book about an owl learning to fly. So began the next chapter of our life.”

Sally is one of 13 bereaved parents to share their experiences, feelings and opinions in a book By My Side: Stories of parents whose child has died from cancer.

Content from the book, published by cancer charity, Redkite, has recently been adapted into an animated video, below.

Sally says the book was published nine years after Conor’s death, when there was no equivalent resource available.

“There are lots of books out there about grief and many of them are written by professionals who study grief, but I don’t think you can truly understand it until you’ve done it.

“I think that’s where this book has hit the right spot.”

Nearly a decade after Conor’s death, Sally is still experiencing many of the emotions expressed in the book. She says it is valuable to know that she is not alone in her grief and that she is normal.

Sally says that reassurance is valuable because she often encounters people who believe there is one right way to grieve. That’s not to say, however, that she relates to every experience or emotion captured in the book.

“I don’t necessarily understand every parent who has lost a child,” she says.

“We all go through it differently and the book brings out that variety of different thoughts.”

She says the book is also valuable in reminding grieving parents that they are not alone.

“I know lots of parents who don’t really want to share those deep feelings with their friends or family, because they won’t understand them and they’ll end up feeling silly.

“The comments in the book makes you feel it’s okay. I can probably keep doing this.”

She says as a family, it has been important to let some happiness return and not feel guilty about it.

“When you feel those moments of light come in, you have to let them in because there is nothing wrong with having a laugh or a smile when you’ve lost a child.

“That doesn’t mean I don’t miss him. He is there, in our thoughts, all the time.”