My guardian angel has fallen but will fly again

Queensland artist Lori Fahy is one of 82 artists who have entered Palliative Care Australia’s Life in Death art competition. See the full range of entries and cast your vote for the People’s Choice award.

Self-taught artist Lori Fahy has always believed that she has a guardian angel. She grew up feeling protected by him. She has also seen him, with his massive wings, in her dreams and meditations.

Lori is convinced her angel has saved her life many times. Years ago when she was walking with her three young children, he made her stop in her tracks with such force she felt she had walked into a wall.

“I just had to stop – it was a really strong feeling and as I did that a truck came down the road. Sheets of glass fell off the truck and smashed all over the road. If I had kept going, that glass would have gone all over me and my young girls and we would have been cut to shreds.”

Lori was compelled to paint her guardian angel after hearing that her father had been diagnosed with stomach cancer. The resulting image, which she entered in the Life in Death art competition, depicts her angel on the ground, heavy with grief, but with magnificent wings that will enable him to fly again. 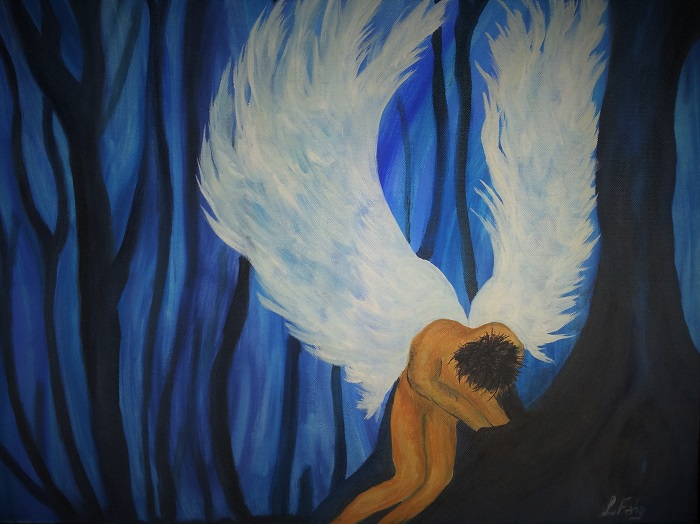 “I used it to express myself at that time and I just painted what I felt,” says Lori, who was living with a diagnosis of thyroid cancer.

“It is a dark piece but at the same time it was freeing to do; just getting the emotions out there.

“For me, there is a lot of strength in that picture. Even though he is on the ground, he is in a warrior pose where he is gaining strength and getting ready to get back up to fight.

“The wings are a symbol of being able to pick up and go on.”

Lori says even as a young child, she found the process of painting therapeutic.

“I have used it my whole life to heal and I will continue to use it until the day I die,” she says.

Lori faced further traumatic times ahead, as her mother was diagnosed with breast cancer. Her mother had a double mastectomy. Two days later her father had a stage four tumour removed from his stomach.

“Both parents were in the same hospital,” says Lori.

Lori says her father died at home, in accordance with his wishes, four years ago. Being able to achieve that and support him as he died was “really good closure”.

“He’s not here anymore, but he is still with me in my thoughts and memories every day.”

Lori says that although her own prognosis was quite good, being diagnosed with cancer left her feeling she was always “looking down the barrel of a gun”. The mother of five says she has had to dig deep to find the strength to keep going.

“Some days I felt like crawling up in a ball and crying like a baby. But I still had to be a mum and a wife. I had a job I liked and didn’t want to lose.

“It really brought out something in me that wasn’t there before; that inner strength and courage. I found strength in my spiritual resources and in knowing my guardian angel.”