Mr Roberts watches closely for cues from patients as he plays and responds to physical and emotional changes. Photo: Farshid Akhlaghi.

Thousands of people nearing death have found peace in the sounds and silences created by Peter Roberts and his harp. His inspiring transformation from furniture retailer to music thanatologist has been captured in a feature-length documentary, to be released later this year.

In the end, it was a set of turquoise contact lenses that pushed Peter Roberts to take a crazy leap of faith. Attending an interior design show, Mr Roberts noticed a salesman’s striking eyes, and then, that he was wearing a suit in a shade carefully chosen to match.

“Such shallowness was all too much for me and I hurriedly left as I couldn’t bare it anymore,” says Mr Roberts, a successful fine furniture retailer who’d known for some time that he needed more out of life.

Mr Roberts set his life on an unorthodox new path, sacrificing financial security and a relatively easy life in order to contribute to people at the end of life. He moved, with his wife Jeannette and their two school-aged children, to the US.

There, Mr Roberts spent two years studying death and society’s attitudes towards it, as well as the harp, in order to become a music thanatologist; a profession virtually no-one in Australia had heard of, let alone understood. Mr Roberts was trained to watch for the patient’s physical, psychological and emotional changes and to play in response to those cues; in short, to read patients, not music. It’s a process he likens to dancing with a stranger in the dark.

“Their rate of breathing can be the conductor. As their breathing changes my playing changes. You get into sync with each other and then it’s not clear who is leading who.”

He doesn’t talk much, and says his goodbyes at the beginning, in order to avoid conversation breaking the magical reverie he creates.

“When I play, the person’s natural reaction is to want to thank me. I put my hands to my lips and motion to them that I’ll just leave. I want to leave them with the embrace of music, and the beauty and gentleness of the quiet.”

Through his music, part of what comforts people is that he conveys that it is okay to die.

“I’m saying, ‘This is all right, this can be a good place to rest into, and this deep restful place is, in fact, a beautiful place to go into at the very end’. I may be the only one in the room who is conveying that to the person. And I’ve learned that it is a really good thing to be saying to people, rather than you need to be fighting the end more or medicating it more, or trying more to treat it.”

While Mr Roberts learned his new profession from doctors, musicians, academics, a rabbi, priests and Buddhist monks, his former neighbour back in Australia speculated that the family had been lured by some sort of cult.

“It was a bit odd I must admit. I’d gone from owning a furniture store to wanting to learn the harp to play for people who were dying. I can see why he thought it was ridiculous.”

At his new hospital-based school, Mr Roberts struggled to keep up with the fast-paced curriculum and felt like “an oaf” next to his slender-fingered young harp teacher as he learned to play.

Meanwhile, his daughters developed tactics to avoid discussing their father’s new specialty. When asked, they’d offer quickly that he was “a harp specialist”, hoping that people would hear ‘heart specialist’ and move on. It saved them trying to explain that their father aspired to ‘anointing people with sound’.

Twenty years later, having just turned 70, Mr Roberts says he is tired. It has been a struggle promoting his profession within the medical community, and his long-term dream of training others hasn’t been met. Having never felt comfortable charging people who are dying, grieving or unwell, the early years were a challenge just to survive.

He has worked part-time for 10 years at Geelong’s St John of God private hospital, playing for premature babies, palliative care patients and people recovering from illness. In order to be able to conduct bedside music vigils for others free of charge, he founded a charity which reimburses him for his time. The charity also helped to fund research on the impact of his musical vigils which Mr Roberts presented with a Deakin University emeritus professor on the global conference speaking circuit and at the prestigious Mayo Clinic.

Mr Roberts also published a book – ‘The Harp and the Ferryman’, recorded several CDs and made harps to keep food on the table.

“I’ve expended so much time and effort and self — financial and personal self — in trying to introduce [music thanatology] into a medical system that in the early years didn’t want to know about it or doesn’t want to fund it,” he says.

“I’ve expended so much energy talking to groups and at conferences and anyone wanting to hear about this. And I did all this on my own steam. That was a frustration and where the energy has gone.

“But having done that, and got into the system, I know it is greatly appreciated and a final statement within the research report stated that its importance is immeasurable.”

Over the years, he has starred on Australian Story, been profiled by Australian Doctor, and granted numerous ABC radio interviews.

More recently, his biggest affirmation of time well spent has been the unexpected interest of award-winning documentary filmmaker, Farshid Akhlaghi. He has made 80 trips to Geelong from Melbourne over the past two years, filming Mr Roberts at work. Still in the process of editing, he plans to submit the 100-minute documentary – From Music into Silence – to international film festivals from August.

“It is telling the story of a man who changed his life to help people; to offer peace, calmness and love to people through his music,” says Mr Akhlaghi, of the movie he has financed partly through crowdfunding, but mostly through his own resources.

“When people are facing their final moments of life, they are really sad and their families are sad and fragile. It is a great gift from a man who can bring calmness to their place, and as he says, he is trying to carry them from music into silence.” 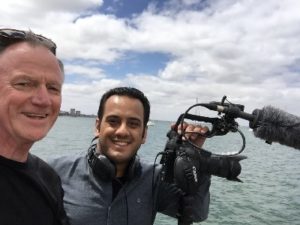 Mr Akhlaghi plans to launch his film about Mr Roberts at an international film festival.

He says he has learned a new way of thinking about dying through his time with Mr Roberts.

“Dying is not a horrible thing for Peter, and that is a great way of thinking about dying; that it is part of life. And another more important thing that I learned from this project is about following my heart. Peter made great sacrifices many years ago, leaving a super successful business to follow his heart. You [need] a big heart to do that. I think Peter is the kindest man I have ever met in my life.

“To be honest, I had no budget for this movie. I said to myself ‘I have to make this movie – I have to follow my heart’. And I have enjoyed it a lot. I am really happy.

“I am not the same person who started this project. I think I am another person – a better person.”

For Mr Roberts, having Mr Akhlaghi come out of the blue, wanting to make a documentary, has affirmed his time as a music thanatologist has been time well spent.

“And that feels good,” he says.