Interior design student Shannon Jones is fundraising to revamp the palliative care ward at a Brisbane hospital. She plans to make it a more comfortable and uplifting environment for patients and their families, and staff.

Over the past 12 years, Shannon Jones has visited four family members in palliative care wards, including her parents.

While each of her relatives was cared for in a different hospital, she was struck by the aesthetics their rooms had in common. She found herself wishing that palliative care rooms were more uplifting and homely, particularly when visiting her mother and her aunt.

“My mother and aunt were both very creative and had a flair for interior styling spaces,” says Miss Jones, who is studying a diploma in interior design and decoration.

“It made me think how much they would have appreciated nicer surroundings while in hospital.

“The thing that affected me most is the fact that this is often the last room people will spend time in.”

Miss Jones has recently embarked on a project to raise $10,000 and redecorate 18 palliative care rooms and two family rooms at the not-for-profit Canossa Private Hospital in Brisbane. 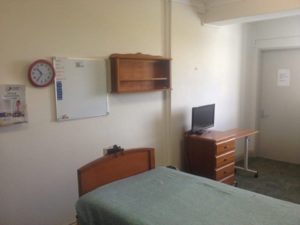 One of the rooms Shannon Jones plans to revamp.

While none of her family members spent time at Canossa, it is the first of many palliative care environments she hopes to improve.

Sue Pearson, nurse unit manager at Canossa’s palliative care ward, says she was surprised to have been approached by Miss Jones and impressed by her enthusiasm.

“She is not going to have any financial benefit from it herself. It’s just something she wants to do to make it better for all the patients, which is exceedingly generous of her,” Mrs Pearson says.

“At the moment the rooms feel aged, with a lot of dark furniture and curtains. The ward has a homely feel and fabulous views, but the rooms could be a lot nicer.

“It’s a fantastic idea and staff have all wanted to make it better for the patients, but we haven’t had the money.”

Miss Jones submitted preliminary designs to Canossa’s CEO and director of nursing and is now modifying them to reflect hospital requirements. She has learned the hospital does not allow live potted plants, rugs and floor lamps are considered a trip hazard, and curtain fabrics must be non-flammable.

She hopes to create a warmer environment using artwork, lamps, curtains and bedding and is aiming to buy more comfortable furniture and wall-mounted televisions.

Miss Jones says if her mum and aunt were still alive, they would both be trying oversee her project.

“It is definitely something that they would have loved to do as well,” she says.

“I think they would be very proud and happy.”

Mrs Pearson says funds raised by the Room to Be project would be managed by the hospital. Follow the project’s progress on Facebook.