Nurses caring for older people near the end of life are now able to access up to the minute clinical advice on the job, thanks to the development of a new smartphone app launched today.

The new free Decision Assist app, palliAGEDnurse, was launched this morning in both Sydney and Adelaide to coincide with International Nurses Day.

At the launch in Sydney, Associate Professor Jennifer Tieman, CareSearch Director at Flinders University  said International Nurses Day was a great day to launch the new app as it recognised not only the birth of Florence Nightingale but acknowledged nurses as a force for change.

palliAGEDnurse was developed by the CareSearch Project Team at Flinders University as part of the Decision Assist Program, which is funded by the Australian Government. It is a companion to the successful palliAGEDgp app and is available through Google Play and the App Store. 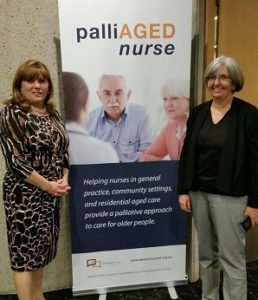