A cooling device enabled Hana Sayers to have the time she needed with her father, after he died.

Hana Sayers found a way to extend how long her father’s body could be kept at home, giving her the time she needed to say goodbye. In the midst of her grief, she was driven to achieve the same for parents of still-born babies, fundraising for a cooling cot that keeps bereaving families together in hospital or at home.

In the hours after Hana Sayers’ father died, his body wasn’t whisked away to a mortuary. Instead, Ms Sayers put her well-thought-out plan in place. She called a funeral director and asked for a cooling device to be delivered to the family’s home. It arrived promptly, how it worked was explained, and the family was left in privacy to be with the man they adored.

Ms Sayers, a registered midwife, says the concept of keeping a loved one at home in the days after they have died seems bizarre to some people. Even her father’s palliative care nurses were a bit taken aback when told of her plans.

“Some said, ‘Wow that sounds a bit weird’. But when the beautiful nurse came the morning after Dad had died and saw him settled underneath the blanket she just cried. She said ‘This is just so beautiful’ and really acknowledged how peaceful and special it was.”

The cooling blanket enabled the family to have Andrew at home for up to five days, should they want to.

“We ended up having Dad at home for two nights and three days, and it was a time that was really incredibly profound,” says Ms Sayers.

Before parting with her father, Ms Sayers and her family bathed him and dressed him in the clothes they wanted him to be buried in.

“That was just really an incredible ritual and a real gift to be able to do,” she says.

Co-founding member of the Natural Death Advocacy Network, Libby Moloney, says many people don’t know that it is an option to keep a loved one’s body at home using cooling plates, cooling beds or even ice. While the concept may not appeal to everyone, she says the families who choose find it forms an important part of their grieving.

In her experience, loved ones generally spend about three days with the body, using the time to have rituals and ceremonies, before placing the person in the care of a funeral director in the lead-up to the funeral.

“Nearly always on the third day families are ready to release the body of the person that’s died; something happens in our psychology that means they are happy to release it then,” says Ms Moloney.

“After you’ve had your babies, your milk comes in on the second or third day and you’re sensitive and your body and mind is working to nurture life. A similar thing happens after someone dies; in lots of cultures the funeral happens on the third day.”

In the weeks after her father’s death, Ms Sayers turned her thoughts to how keeping a loved one’s body for longer might benefit others. The Canberra midwife had been concerned for the emotional wellbeing families of stillborn children, who sometimes didn’t realise they could take time to say goodbye. She became focussed on raising money for a Cuddle Cot, which has a built-in cooling system for babies. 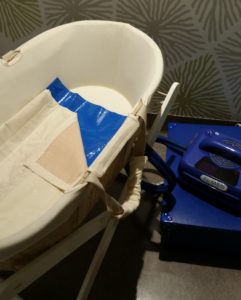 The Cuddle Cot has a built-in cooling system.

“After having the experience I had, I just wanted to do something for other people. The thought of even one person wanting to spend time with their baby and having to go to a mortuary made me realise, ‘I just have to do this’.”

Ms Sayers says over the past year about four Canberra families have used the Cuddle Cot at the hospital where she works and it has helped them to work through the trauma of losing a child.

ACT Health acknowledged the value of Ms Sayers’ contribution earlier this year, naming her ACT Midwife of the Year.

Ms Sayers says her personal experience of grief has inspired much of what she would like to achieve professionally.

“My experience around grief had grown me. We see people who aren’t able to move through their grief and who are either traumatised or really hurt by their experience.

“Experiences of grief in your life are normal. It is normal to have loss or be grieving someone or something, so to be able to support people through grief has become a real area of interest and passion for me.”