Home » Palliative Matters » Patients » Clothes fit to be buried in; Pia creates garments for the grave

Clothes fit to be buried in; Pia creates garments for the grave

Dr Pia Interlandi (PhD) creates biodegradable shrouds for people to be buried in. She also helps families to design and perform meaningful rituals and ceremonies for loved ones who have died. Dr Interlandi is a university lecturer, fashion designer, funeral celebrant and founding member of the Natural Death Advocacy Network.

When you meet people at parties, how do you explain what you do?

It depends on the company I’m in. Usually I say that I dress dead people. People tend to presume that I mean I design clothes for people to wear to a funeral, so I have to explain that I design clothes to be worn by dead people and that I often design the clothing with them before they die. Most people are very curious. I usually get very positive reactions.

I’m doing online dating at the moment, so it was interesting to work out how to explain my work in my profile. It can be a bit of deal breaker for those not comfortable with death – but it’s a big part of my life so it’s a good filtration device for me. I am very upfront and I say I am a fashion designer, educator and death-wear designer. For the most part, my day job is teaching fashion design at RMIT University in Melbourne. I guess that puts me somewhere between the fashion police and Dr Death, which keeps people on their toes! 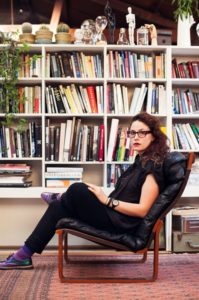 Do people find some kind of therapy in the process of commissioning a garment?

I often get asked if I consider myself an art therapist. It’s not what I’m trained as, and certainly not how I promote my work, but the process of designing a garment definitely opens up conversations about a lot of important things.

Everybody engages with clothing and so I use this to talk about what they like in terms of colour and texture, which then naturally flows into a discussion about what they value towards the end of their life.

We talk about family and friends, because usually it’s people they are closest to who will be dressing them. Someone from their community often helps with making the garment in some way too. We might have a workshop where a few friends come over and we paint the fabric, or we create a plain garment and the family might all put handprints or messages on it. When the family get involved and touch the garment, those handprints then wrap the person after they have died and that love goes with them.

The shrouds don’t tend to sit in a cupboard until the client dies and then get handed to a funeral director. I have a couple of clients who have them hanging up at home as their own memento mori.

Sometimes I dress people who have died an unexpected death. I worked with one family who decided to wrap their loved one in the special family tablecloth that came out at Christmas every year. Everyone who had sat around the table was invited to come and place a handprint and message on it.

Have you had any unusual requests?

I have one amazing client who brought in a 1970s lurex metallic dress and her bridal veil. She wanted me to incorporate both of them into her shroud, along with two perfumes to spray onto the garment as I was sewing.

I created the main piece of this fairly outrageous shroud using the long-sleeved, high-necked tube dress which was purple, silver and blue. I can only imagine that in the 1970s she was wild!

We painted sun-sensitive dyes on the shroud and put the bridal veil over the top. After leaving it in the sun, the veil’s lace left a delicate pattern like stars, so we decided it was her intergalactic travelling shroud.

I used the veil to create a piece to lay over the top of her body.

This creative lady has the outfit on display at her home and has absolutely embraced the notion of using it as a conversation tool. She invited some of her friends to come and add some paint to it. Apparently they thought it would be the most morbid experience of their life, but they ended up having a really enjoyable day.

This client is in her 70s and she is quite well. She’s just really proactive in getting things in order, because she wants her community to focus on what is important when she dies. She wants them to be able to write and tell stories and really engage with her death, rather than having to organise things like who to invite to her funeral and what needs to be said.

She is a real trail blazer in terms of having all the right conversations, so that when she dies, everything is in place.

How did you become interested in dressing dead people?

My dad’s parents were Italian. His mother – my nonna – had this family album of wedding and birth pictures, and in it was a picture of a dead lady. It was nonna’s mother. Growing up, I was completely intrigued by that picture. It has had a big impact on my life.

Nonna had the photo because she had migrated to Australia and wasn’t able to return to Italy to attend her mother’s funeral. She couldn’t be at the laying out of the body with her sisters, which was an important family tradition. For me, that really planted a seed.

The first person I dressed for burial was her husband – my nonno. It was probably one of the most important moments in my life. I wasn’t working in this field back then. I found it both cathartic and confronting.

I felt was very important to dress him in something which gave him back nuances of his personality. But I didn’t realise how difficult it was to get jocks, a shirt, a suit and a tie onto a big six-foot tall guy who was very dead. It was the moment when I was putting his shoes on that really threw me. I thought, ‘These shoes have a lot of life left in them and he isn’t going to be walking anywhere’. In that moment I realised the most garments were designed for life and living in and to be worn while you are standing up. Everything fits really awkwardly when you are laying down.

My auntie and I dressed nonno together and because it was a slow process we had lots of time to talk. We were really able to sit with him, look at him, and touch him and feel how cold and lifeless he was. Doing that really helped us to understand that we could let this physical form of him go. That has become a major part of my practice; to spend time with the body of the person you love.

What makes the process of dressing someone who has died such a powerful experience?

Some people say the body is just a shell and they don’t need to see it, because it isn’t the person they love anymore.

That is partly true, but for me, it is still the physical form of the person that you knew intimately. You knew their hands and their face and that spot they often missed when they were shaving.

I am agnostic, but I truly believe that dressing someone is the most spiritual encounter you will ever have. It is so profound. I get goose bumps. If ever you can see the truth of a soul, or a person’s energy or chi, it is when they are no longer in their body.

It can be really profound for families who take the body home, who may not have been lucky enough to catch that elusive moment of death. To see the body shutting down, no longer owned by this land of the living; so still and ready to go back into the earth. You’d be surprised how beautiful the dead are.

Are your clothes designed to go back into the earth too?

I don’t use synthetics unless a client wants a really durable fibre and that’s usually for a reason that is symbolic. I tend to use plant- or protein-based materials that are biodegradable, like cotton, linen, silk and wool. I find the idea of being buried in something that is rapidly biodegradable very comforting, knowing that the earth will be able to absorb and embrace the body and reconfigure it into the environment.

Have you found any part of your work confronting?

One of the most confronting things I have ever done is a research project for my PhD which involved pigs. There was a documentary made about it, humorously titled ‘Death Down Under’ which was screened in New York.

I was working with a forensic entomologist, investigating what impact garments have on the way that a body decomposes if the body is buried without a coffin in a shallow grave. Part of the pig project for me was also about how you treat a dead body with compassion; even a fleshy body that is decaying.

I wanted to use just one pig, so I was horrified to learn that we would need to track 21 pigs over a year in order for the research to have any statistical significance. It took me three months to agree to that. I’ve been a vegetarian since I was eight and sensitive to animals. I loved those pigs. I named them all and am eternally grateful for each them.

I created garments for the pigs and dressed each of them before they were buried. Over the next year, we then did seven digs, to witness the various stages of decomposition. I approached it as following a natural process and being exposed to what bodies are designed to do, but at times it was frankly, quite gruesome and undeniably disgusting.

Towards the end of the project we had to dig through a lot of vegetation to recover the pigs that had been buried the longest. One had every crevice of its skeleton covered in roots, which had left a pattern. It was so beautiful I burst into tears; it was held in the closest, most intimate, embrace imaginable.

I had been wondering whether you could design a garment that would exist as long as the skeleton, which could tell future archaeologists something about who the person was. I had embroidered polyester onto a garment in a recurring pattern that was symbolic of veins, roots and rivers. When I dug up that last pig’s skeleton and looked closely at the bones, I saw that nature had already left that same pattern.

Does it take a toll on you, working with people who are facing their own death?

I have quite a clear line in my mind about when people are my dead, and the permissions I’ll give myself in those instances to throw myself down and grieve uncontrollably. I feel privileged to have clients approach me, but I am clear that it is different. I am there for their death. Even with that distinction, I do become close to them. On many occasions I’ve choked up, realising that I might be seeing them for the last time.

I have put a lot of thought into how best to say goodbye. What do you say? Is it good luck? Goodbye? In the end, I usually settle on something like ‘safe travels’.