Celebrating the role of shrines in storing memory and hope

ACT ceramicist Fran Romano is one of 82 artists who have entered Palliative Care Australia’s Life in Death art competition. See the full range of entries and cast your vote for the People’s Choice award.

Ceramicist Fran Romano says memory, loss and nostalgia are themes that frequently shine through her art work, largely influenced by her parents’ experiences as Italian migrants after WWII. Leaving a life of extreme poverty in Calabria, in southern Italy, her mother and father settled in Canberra, where Fran was born.

As an adult, she has often travelled back to their villages, where she finds says the sense of mass exodus tangible.

“I think when you have that immigration story in your background it is often imbued with that sense of loss and longing and what you’ve left behind, even though people have come and taken up new opportunities and wonderful things have happened and they’ve made a new life,” says Fran.

“My work is always personal. I guess I’ve been exploring family connections, history, memory, culture and place. I always need a story or theme to sink my teeth into because there is a strong narrative element to what I do. Memory and loss and nostalgia come through all the time.”

During her trips to Italy, and Europe more generally, Fran found great beauty in cemeteries. She enjoyed the way they mirrored towns, seeing mausoleums as being like small villages with stunning architecture and textures.

“They don’t freak me out. I really like them. I feel like I will do more work around that theme in the future.”

This evolved into a fascination with shrines, which she started photographing during her travels. Although Fran was brought up a Catholic, the shrines resonate with her on the basis of culture and rituals rather than religion. They appeal to her as little houses that are holding places for memory and hope, and inspired the artwork she has entered in Palliative Care Australia’s Life in Death art competition. 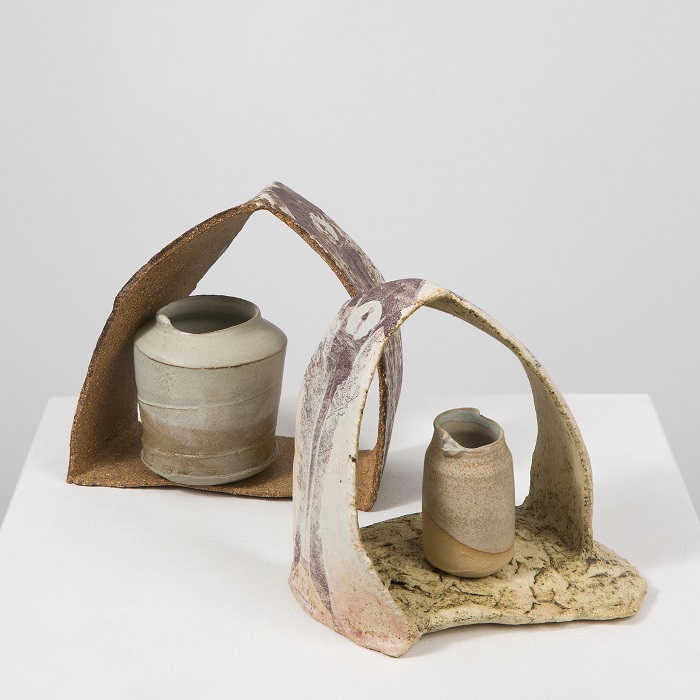 “When you’re in Europe in a Catholic country, shrines are all over the place. You might be walking in the park and there’s a shrine to the Madonna with a candle or fake flowers and in churches there are little shrines with candles you light to invoke the assistance of a saint.

“People place candles or offerings or flowers in the shrine, like they do on graves. And often you light a candle in memory of someone. It is creating a visible link to something that is not tangible – a link to that loss or longing. It’s about connection. That is something that I find really touching and beautiful.”

Working with clay became Fran’s therapy after her mother’s death seven years ago. Fran gave up work to care for her mother for about a year, and was with her when she died, which she says “was the most profound experience”.

“Going through that with her has given me a different relationship with death and I feel much more comfortable with it, exploring it and talking about it,” Fran says.

However, Fran says the first few years after her mother’s death were a difficult time. She found she didn’t want to go back to her previous job. She just wanted to make pots.

“Clay was like my therapy and healing so I immersed myself more fully into working with clay and I enrolled in art school,” she says.

“It is very interesting for me to think about that and wonder, without my mother’s death, whether I would have been brave enough to do that.”