The Compassionate Friends has launched a national support line for people grieving the death of a loved one, giving them the opportunity to speak with someone who can genuinely relate.

The trained volunteers manning the free-call number – 1300 064 068 – are all bereaved parents, siblings or grandparents.

The Compassionate Friends CEO, John Sedunary, says the strength of the national support line, which operates 24/7, is volunteers’ lived experience.

“The feedback we constantly get is that when people ring, they are talking to somebody who gets them and that is the strength of peer support,” he says.

“Our training focuses on listening skills and showing empathy. It’s not so much about volunteers telling their own story; it’s about them listening and when appropriate telling parts of their own story to help.”

Mr Sedunary says volunteers provided the service on a state-by-state basis until the launch of the national line last week which he hoped would help raise awareness of the service.

“There are a lot of people who are bereaved parents and brothers and sisters and grandparents who are probably struggling and don’t know where to turn,” he says.

“If they knew of us, they could then make a decision; ‘Will I give them a call or not?’. I want them to know about us and so they’ve got that choice.”

Volunteer co-ordinator Jenny Galati says the line receives calls from people who experienced the death of their child only 24 hours prior, through to people who lost a loved one 15 years ago.

“They’re people from all different walks of life, but in the end, you can tell by their voice that they’re in a much better place once they’re ready to get off the phone. Generally, our calls are half an hour, to an hour, but there are times we are there for longer if the person needs us.” 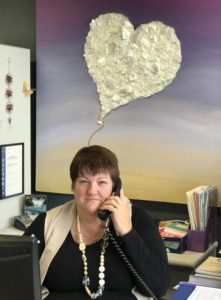 Jenny’s daughter Danielle died 12 years ago, aged 16 and 9 months. While Jenny felt supported during the week of Danielle’s funeral, afterwards she and her immediate family felt isolated and alone. That changed when she discovered The Compassionate Friends. Having benefited from the support, she wanted to contribute.

“Five years ago I decided I wanted to do something in memory of Danielle and be there for other parents who had been in a similar situation to me, and maybe not had the support they needed,” she says.

“I don’t know how I would have got through my grief without The Compassionate Friends.”

Jenny says about 80 volunteers work on the national phone line. They are called ‘phone answerers’ because they are not trained counsellors, and their role is to listen and maybe share what they have found helpful, but not offer advice.

She says the phone line fills an important gap, as friends and family may not know what to say, and can feel inadequate, not being able to take the pain away. Yet most bereaved people just need someone to listen and allow them to talk. She says it can be particularly hard for parents to talk about a child who has died.

Having lived experience of grief “gives you a real connection with the person you are talking to, as there are common things you can share and most families get great comfort out of that”.

She says the biggest struggle for most families is the isolation of grief. People value being able to talk about happy times, which are often bitter-sweet.

“For me, I’m now a grandmother, and as much as I’m so happy about having my granddaughter, it is still a struggle because Danielle never got to meet her,” she says.

“People don’t understand that grief physically hurts, but as soon as you say that to another bereaved person, they get it.”

The organisation is also developing a phone app for people aged 18-30, enabling them to be supported by text.