Anchored to withstand one of life’s tsunamis

WA artist Bill Mendes da Costa is one of 82 creative people who have entered Palliative Care Australia’s Life in Death art competition. See the full range of entries and cast your vote for the People’s Choice award.

Whenever WA artist Bill Mendes da Costa paints or draws, he invests a little of his soul. He creates from the heart, inspired by events or concepts that resonate with him, rather than simply recording beauty.

When one of Bill’s dear friends had a near-death experience, it struck him that a form of tsunami had raged through her life. Instead of the colourful palate that is typical of his work, instinct pushed him toward drawing with blacks and greys, with a lone splash of yellow for optimism. He depicted his friend Riana as a tiny form, isolated on a rock surrounded by turbulent walls of water, conveying the magnitude of the event and its impact on her. She stands anchored to a rock, looking towards light that surrounded by darkness. 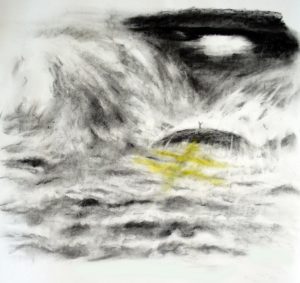 We have an anchor that keeps the soul (click on image to enlarge).

“Riana had a cardiac arrest on the beach and she is a super-fit Pilates instructor with no history of heart disease,” says Bill, who trained as a graphic artist.

“It was terrible – just horrendous. These things come into your life and you have no idea where they have come from. It is puzzling and you don’t always have a slick answer. You think what happened and why did it happen to me?”

In trying to make sense of the scare, Bill was struck with a series of ‘what ifs’. What if the young lifesaver hadn’t been there, with the right medical equipment to hand, and taken action so quickly? What if Riana had been driving, or swimming, or in a shopping centre?

He was affected by the miracle that circumstances had not played out differently, as they would have, given different timing and location.

“It was amazing that there were medical people around at that time. Otherwise she could have died. I saw the graciousness of God in it.”

He says this has strengthened his conviction in the power of the human spirit and forces that are bigger than our physical existence. He titled his work ‘We have an anchor that keeps the soul’, which borrows lyrics from an old hymn, which continue ‘steadfast and sure while the billows roll’.

Lyrics by Leonard Cohen also helped Bill to make sense of the event: “There is a crack in everything. That’s how the light gets in. The forces around seem black and overwhelming but there is always hope and life”.

“Without hope and love there is nothing. Life is a bit hollow and meaningless.”

Riana was initially so confronted by his drawing that she couldn’t look at it.

“The experience was too raw. Then the more she thought about it and looked at it she saw God’s care was around her.

“It made her look at the experience from a whole new perspective and to accept that things do go wrong in your life. It helped her in her healing. Now she loves it.”

Riana was happy for the piece to be entered in the Life in Death art competition and hoped that it might help others grapple with life’s significant and unexpected events.

Bill sees value in the competition inspiring people to talk about death.

“You’re better off walking through it than thinking death will never happen. Why don’t we look at these things and talk about them? We don’t tend to go into anything deep — people talk about the footy or soapies.

“But the more we talk about these things the more healing can come out of that. That’s why it’s good to have art competitions like this.”