Home » About PCA » Our Patron 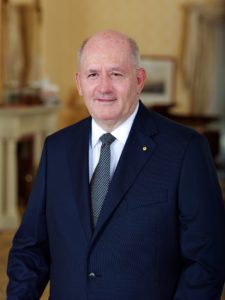 Governor-General of the Commonwealth of Australia

Peter Cosgrove was born in Sydney in 1947.  The son of a soldier, he attended Waverley College in Sydney and graduated in 1968 from the Royal Military College, Duntroon.

Early in his military career, he fought in Vietnam, commanding a rifle platoon.  He was awarded the Military Cross in 1971 for his performance and leadership during an assault on enemy positions.

In 1972, he served as Aide de Camp to Governor-General Sir Paul Hasluck.  He returned to regimental life as second in command of a Company, rising to Adjutant then Company Commander in the Army’s 5th Battalion Royal Australian Regiment  (5 RAR), then 5/7 RAR in Holsworthy, Sydney.  Subsequent appointments included a period as a tactics instructor at the Army’s Infantry Centre in Singleton, New South Wales; a year’s study at the United States Marine Corps Staff College in Quantico, USA; extended periods of duty in the United Kingdom and India; and command of 1 RAR.  He was appointed a Member in the Military Division of the Order of Australia (AM) for his service in command in 1983-84.

Peter Cosgrove came to national attention in 1999 when, as Commander of the International Task Force East Timor (INTERFET), he was responsible for overseeing that country’s transition to independence.  For his leadership in this role he was promoted to Companion in the Military Division of the Order of Australia (AC).

Subsequently, he accepted positions on several boards, including QANTAS, Cardno and the Australian Rugby Union.  He was appointed by the Queensland Government to lead the taskforce rebuilding communities in the Innisfail region following the devastation caused by Cyclone Larry in 2006.  From 2007 to 2012, he chaired the Council of the Australian War Memorial, and served as Chancellor of the Australian Catholic University from 2010 until early 2014.

On 25 March 2014, Prime Minister Tony Abbott announced that General Cosgrove would become a Knight in the Order of Australia when sworn in as Governor-General.

General Sir Peter Cosgrove gave the Boyer Lectures series, “A Very Australian Conversation” in 2009.  His autobiography “My Story” was published in 2006.  He was named Australian of the Year in 2001.

He and his wife Lady Cosgrove have three adult sons and one grandson.

Sir Peter has been Patron of Palliative Care Australia since May 2014.